Facebook has designed a system that would allow individuals and advertisers to make direct connections to those physically nearby that share similar interests or are open to receiving certain advertisements. 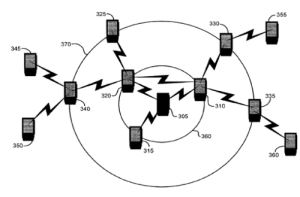 The company’s work was outlined in a U.S. patent filing for a “wireless social networking” system that was published this week and represents a further step towards advertising and communication that is locally targeted.

Under the envisaged system, a wireless device would establish a connection with other wireless devices nearby. The communication wouldn’t run via the Internet but would be based on a direct link between the devices. Each device might be linked to one or many other devices, depending on the density of people in a certain area, and each would be open to sending, receiving and relaying messages as part of the mesh network.

The system outlined in the patent application envisages users setting preferences for receiving or communicating with others based on interest and proximity. Facebook calls the combination of these two factors an “interest metric.”

Users would categorize themselves as individuals, businesses and advertisers with further sub categorize for finer distinctions.

Businesses are continually trying to refine their advertising so it only reaches consumers that might become customers. That’s especially true of local businesses, which often have limited advertising budgets.

That’s where the mesh networking trumps an Internet connection, according to the patent application.

The system wouldn’t be totally focused on advertising — and that might be key if users were ever to sign on should such a system launch. The interest list would also enable users to find others nearby that shared similar interests and hobbies or act as a filter for discovering existing friends that are in the area.

Details are included in U.S. patent application 20130208714 that was published on Thursday. It was filed with the U.S. Patent and Trademark Office on March 14 this year.

Patent applications provide insight into the types of projects that companies are working on. They are typically filed early on in the development process and the appearance of a patent application doesn’t necessarily mean a future commercial product.