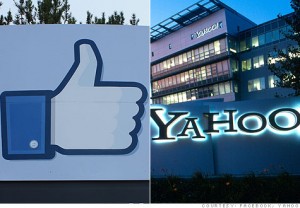 Facebook and Yahoo announced Friday they have settled a high-profile patent dispute with a deal that analysts said would likely be good for both sides.

As part of the agreement, Facebook and Yahoo have signed a cross-licensing deal granting access to each others’ patent portfolios, they said in a joint statement. They’ve also forged an advertising partnership and will expand an existing content distribution agreement.

Yahoo sued Facebook in March under the leadership of former CEO Scott Thompson. It accused Facebook of infringing patents covering technologies related to social networking, advertising, privacy, site customisation and communications. Facebook’s News Feed and the way it handles privacy were both in violation of Yahoo’s patents, Yahoo contended.

Soon after, Facebook shot back with its own patent infringement lawsuit against Yahoo.

That could mean integrating more of Facebook’s social sharing features into Yahoo’s coverage of events such as the Olympics, analysts said. But they didn’t rule out the possibility that Facebook will host Yahoo’s content on its own site.

In large part, however, Yahoo was looking for a way to put the lawsuit behind it, said Karsten Weide, an analyst with IDC. “Primarily, I think this is Yahoo saying, ‘Oops, sorry we bothered you with the patent stuff.’ We’re going to go home now,” he said.

But in the process, Yahoo secured a piece of the social pie that Facebook dominates. “Yahoo can go to [advertising] customers and say, look, you wanted social and we’ve got social,” he said.

On Facebook’s side, it will likely benefit from the access it gains to some of Yahoo’s content.

“One of the real opportunities [for Facebook] moving forward is using their platform to distribute content,” said Allen Weiner, a Gartner analyst.

“Facebook wants to beef up their supply of content that can be shared across the Facebook network. They don’t really have any of their own content, be it original or even aggregated, so Yahoo makes a logical partner for that,” Weiner said.

Hearings in the patent case had been set to begin later this month.