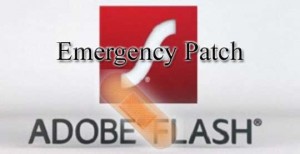 Adobe updated Flash Player on Thursday in order to patch a pair of zero-day vulnerabilities that hackers have reportedly been using to hijack Windows PCs and Macs.

The out-of-band, or emergency, update was Flash’s first of the year and the first since Adobe moved the media software to a regular update schedule last autumn.

As part of that schedule, Adobe was to ship a Flash Player update next Tuesday, but it instead released the fixes early. In a Thursday advisory, Adobe confirmed that the update patched two vulnerabilities, designated CVE-2013-0633 and CVE-2013-0634. Not surprisingly, it rated the update critical: Criminals have been exploiting both vulnerabilities for an undisclosed amount of time.

“Adobe is aware of reports that CVE-2013-0633 is being exploited in the wild in targeted attacks designed to trick the user into opening a Microsoft Word document delivered as an email attachment which contains malicious Flash content,” stated the advisory.

The second vulnerability, CVE-2013-0633, has been used in a similar fashion against Windows targets, but has also been exploited during “drive-by” attacks against Firefox and Safari users on the Mac, said Adobe. A drive-by attack requires only that a victim be duped into browsing to a malicious website hosting an exploit.

Most Flash exploits are aimed at Windows users simply because they constitute the vast majority of potential victims. It is unusual for attacks to also target Macs running Apple’s OS X.

Users should update the Windows and OS X editions of Flash Player as soon as possible, said Adobe. People running Flash on Linux and Android need not be in a hurry: Adobe pegged their updates with a priority rating of “3”, a label that means users can apply the patches at their discretion.

Because the only reported drive-by attacks, which are indiscriminate rather than targeted, have taken aim at OS X, Mac owners should be especially quick to do an update.

Shortly before Adobe published its advisory, Microsoft posted one of its own to warn users that an IE10 update for Windows 8 and Windows RT was also available. Microsoft has copied a page out of Google Chrome’s playbook and baked Flash into its newest browser.

As of Thursday evening, however, Google had not yet released a new version of Chrome that included the updated Flash.

Adobe credited a pair of Kaspersky Lab researchers with reporting CVE-2013-0633, and said CVE-2013-0634 had been submitted by the ShadowServer Foundation, aerospace company Lockheed Martin, and MITRE, a firm that manages several research centres funded by U.S. government agencies, including the National Security Engineering Centre for the Department of Defence.

Lockheed Martin and MITRE are no strangers to Adobe. In December 2011, the two were credited with reporting an Adobe Reader vulnerability. Like those patched today, the Reader flaw was a zero-day bug that was already in use by attackers by the time it was revealed.

It’s possible that the targeted attacks launched through malicious Word documents had been aimed at Lockheed Martin, MITRE or both. Such attacks have been commonplace in defence, aerospace and other industries whose secrets and intellectual property have value to criminals.

It also appears that Microsoft knew of the Flash exploits before Thursday. Searches of the two CVE identifiers found a pair of matching entries in Microsoft’s malware database that represented signatures added to Microsoft’s antivirus software on February 2.

Microsoft and Adobe share vulnerability and exploit information as part of the former’s MAPP (Microsoft Active Protection Program), under which the two companies give several dozen other companies early information about upcoming patches so they have more time to create their signatures.

The patched versions of Flash Player for Windows, Mac and Linux can be downloaded from Adobe’s website. Windows and Mac users can also wait for Flash’s automatic updating tool to kick in.