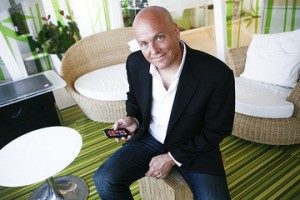 The former general manager of Microsoft’s Windows Phone developer platform started a new job at Amazon on Monday, leading a team working in a new area for the company.

Charlie Kindel updated his LinkedIn profile to say that he’s now director of “something secret” at the Seattle-based online retailer.

“I’m building a new team going after a totally new area for Amazon. I’m hiring cloud and mobile developers and testers, program managers, and product managers,” he said in the job description.

Kindel has spent most of his career at Microsoft, according to his LinkedIn profile. Jobs at the company began with developer support in 1990 and he rose through the ranks reaching general manager of Windows Home Server in 2004. He stayed at that position until 2009, when he jumped to become general manager of the Windows Phone Developer Experience.

On his personal blog, Kindel posted news of his new appointment at Amazon. Although with Monday being April 1, a day when some like to play jokes, Kindel wrote that the blog posting combined fact with fiction.

It’s not clear if there’s truth in any of that statement. There was no such disclaimer on the LinkedIn profile.