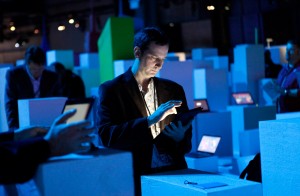 Barely five months after its release, Windows 8 has captured 3.17 percent of the desktop operating systems market, though it still lags behind Vista, according to the March stats from Net Applications.

Windows 8 shipped in October 2012, and its market share has grown slowly but steadily. In November, Net Analytics tracked a 1.09 percent share for Windows 8, which went up to 1.72 percent in December. It hit 2.26 percent in January, then 2.67 in February, and took another jump to reach 3.17 percent in March.

The Net Applications stats are obtained by tracking 40,000 web sites and data captured from 160 million unique visitors across the web. Another company that tracks market share is StatCounter, which calculates its figures based on 15 billion page views from web sites it tracks. StatCounter’s figures are not very different from those of Net Applications, showing Windows 8 at 3.9 percent for March, a slight increase from 3.16 percent in February.

Net Applications’ stats go back only to 2011, so one can’t compare how Windows 7 did in its first five months; but StatCounter has more historical data. Since StatCounter’s current figures closely match those of Net Applications, a comparison gives some illustrative context.

StatCounter’s figures show that, five months after its launch in October 2009, Windows 7 had 11.92 percent of the market, while Vista had 20.73 percent and the leader was XP with more than 51 percent of the market. Based on these statistics, it appears that in its first five months, Windows 7’s adoption rate was three times higher than Windows 8’s.

It’s not surprising that Windows 8 lags Windows 7’s initial adoption rate, as the new OS has polarised users with its new interface. Ed Bott uncovered a similar result when he compared for Cnet more than 3,000 Amazon ratings for boxed Windows versions. His research shows that Windows 7 has overall 47 percent 5-star ratings, compared to 36 percent for Windows 8, and 23 percent for Vista. Windows 8 also has 29 percent 1-star ratings, faring better than Vista’s 42 percent, but still above 17 percent of the Windows 7 1-star ratings.

With Windows 8, though, Microsoft can address issues with the OS much more quickly than previously, since the company announced it will update more frequently. The first such update in line is Windows Blue, which is due out later this year. A version of this update has been already leaked.