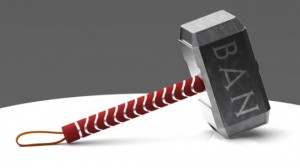 Google has removed some applications from its Play store that block web advertisements, saying that they violate its rules by interfering with other services.

One of the banned applications, Adblock Plus, said it received an email notification on Wednesday from Google saying it violated section 4.4 of the Developer Distribution Agreement.

“After a regular review we have determined that your app interferes with or accesses another service or product in an unauthorised manner,” Google told Adblock Plus. “This violates the provision of your agreement with Google referred to above,” the company said.

Google’s Play store hosts applications for Android tablets and devices. The company could not be immediately reached for comment.

At least one other ad-blocking product, AdAway, has also been removed.

Google’s revenue is highly dependent on Internet advertising. Applications that block ads means users won’t click on them, depriving companies such as Google and advertising networks of revenue.

Adblock Plus, an open-source project started in 2002, said in a statement that “Apparently Google is putting revenues over the freedom of the Internet and choices of the users.”

Close to one million users have downloaded Adblock Plus from Google’s Play store since November 2012, said Till Faida, managing director of Eyeo in Cologne, Germany, the company which manages Adblock Plus.

Adblock Plus is still available in Google’s Chrome Web Store, which stocks applications compatible with the Chrome browser. But Faida said he fears that may change “if users let them get away with limiting their freedom and choices on Android.”

Adblock Plus will continue to distribute the Android extension on its own website as well as other ones, Faida said.

In December 2011, Adblock Plus acknowledged the importance of Internet advertising by modifying its extension to allow some non-flashy ads to be displayed by default, although the feature could be turned off.

The change was made after a survey showed many Adblock Plus users were fine with some advertising, as long as it was not too intrusive or obnoxious.