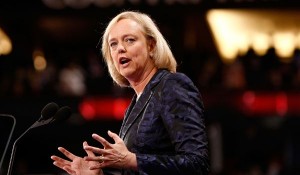 Hewlett-Packard CEO Meg Whitman announced on Thursday that the firm’s first low-power server for hyperscale computing environments, developed under a project it calls Moonshot, will go on sale next quarter.

The project is an effort to build low-power servers based on alternatives to Intel’s Xeon processors for use in mega data centres, like those operated by Facebook and Google.

HP announced the project in 2011, and the first server platform it talked about, known as Redstone, was going to be based on an ARM-type processor from Calxeda.

HP switched gears last year, however, and showed another Project Moonshot server design dubbed Gemini, the first version of which was to be based on an Intel Atom processor.

It could be that Atom server that HP plans to release next quarter, though Whitman did not say and an HP spokesman declined to comment. The server would be a little behind schedule, since an HP executive originally said Gemini would be out late last year.

“We expect this to truly revolutionise the economics of the data centre with an entirely new category of server that consumes up to 89 percent less energy, 94 percent less space and 63 percent less cost than a traditional x86 server environment,” Whitman said on HP’s earnings call Thursday.

This comes s HP’s attempt to capitalise on a growing market for very low-power servers used by companies delivering online services on a large scale. Other players include Dell, which was quick to jump on the market, and AMD, which bought low-power server vendor SeaMicro and plans to licence its technology to other computer makers.

The servers aren’t designed to run traditional enterprise applications, however. They’re intended for programs written specially for such environments, including Web applications and big data software such as Hadoop.

Gemini gets its power savings from a new Intel Atom chip known as Centerton, which Intel has said consumes six watts of power, far less than its Xeon chips. Calxeda isn’t necessarily out in the cold, however: HP said Gemini uses a “processor cartridge” that will allow it to use other processor types in the future.