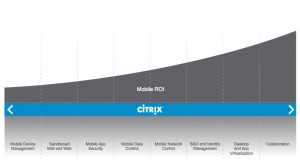 Citrix on Wednesdy announced XenMobile, a rebranded and integrated mobile device management (MDM) software, which the company acquired through its acquisition of Zenprise last year.

“What we’ve been doing is integrating Zenprise pieces with the Citrix pieces. Fortunately for us, it wasn’t a messy acquisition integration process,” said Amit Pandey, Citrix’s general manager for mobile platforms. “We’re not done, but we didn’t’ have to do a lot of rationalisation of the pieces.”

XenMobile MDM Edition is the next generation of the Zenprise product integrated with Citrix products and tested with NetScaler, Citrix’s cloud load balancing and security web app. For example, mobile users can have access to native Citrix apps, such as the Citrix @WorkMail email app, XenDesktop, GoToMeeting, ShareFile, and Podio. At the same time, end users can also have secure access to corporate third-party applications such as SAP, Windows or Salesforce.com, Pandey said.

The Mobile Solutions Bundle also precludes the need for a virtual private network (VPN), by offering a secure browser that through secure socket layer (SSL) for both Apple iOS and Android devices, Pandey said.

“Because we own NetScaler, and it’s server based, we have a highly scalable way of doing SSL tunnelling. We’re able to do thousands of connections,” Pandey said.

Citrix’s new Mobile Solutions Bundle, which is comprised of XenMobile MDM and CloudGateway, will now allow mobile users securely access enterprise apps in one store. Until now, Pandey said, Citrix users have had to piece together products in order to garner a full set of mobile-accessible applications.

The Mobile Solutions Bundle provides five key capabilities: Role-based management for both corporate and employee-owned devices; secure e-mail, browser and data sharing apps; mobile app containers centralise IT management, security and control for any mobile app; a unified app store as a single place for users to access all of their apps; and identity management with single sign on.

“So, let’s say you have an email attachment. Often you’re tempted to store it in Dropbox or Box. Once you store it, that data is out of the hands of IT,” Pandey said. “With this solution, I can encrypt that mail, so that you can’t read it once you leave the company and you no longer have the key. You can’t forward it, you can’t store it.”