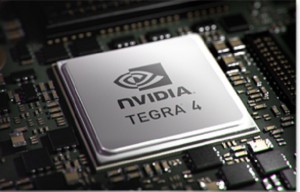 Chinese technology firm ZTE said on Thursday that it will be the first vendor to launch smartphones using Nvidia‘s Tegra 4 processor, with new models slated to arrive in China before mid-year.

Unveiled in January, the Tegra 4 processor is the latest chip from Nvidia that promises to bring faster performance and better battery life to mobile devices such as smartphones and tablets. The Tegra 4 is based on ARM‘s quad-core Cortex-A15 processor and features 72 graphics processing unit cores, along with optional support for 4G LTE.

ZTE made the announcement as the company is striving to boost its presence in the smartphone market. In last year’s fourth quarter, the Chinese handset maker ranked fifth among the world’s largest smartphone makers, according to research firm IDC.

The company has historically excelled at selling lower-end handsets, but is also aiming to release more premium models for markets such as the U.S. In January, the company showed off a flagship Android phone, called the ZTE Grand S, which is built with a five-inch full HD screen. The handset will be released in China, and possibly the U.S. and Europe, but was unveiled loaded with a quad-core processor from Nvidia’s rival Qualcomm.

ZTE’s Thursday statement did not discuss the features of its Tegra 4 smartphones, and only stated that the so-called “super phones” would “provide full HD entertainment and multimedia experiences” for consumers. The company did not immediately comment on when the phones would arrive in other markets outside China.