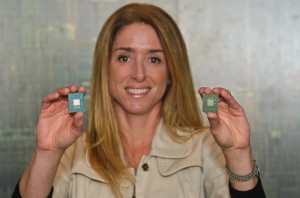 After years of incremental improvements, Atom chips are poised for a big jump in performance and power efficiency with a new generation of low-power processors that have shipped to server makers for testing.

Atom chips are primarily designed for smartphones and tablets, but have also been repurposed for low-power servers. The server variant will be the first Atom chip made using Intel’s 22-nanometre manufacturing process, which is considered the most advanced in the industry.

The Atom chip, code-named Avoton, will become commercially available in servers starting in the second half of this year. Avoton chips will be based on the new Silvermont microarchitecture, which is the first major Atom architecture redesign since the chip was first released in 2008.

Specifically, Avoton server chips will bring more performance-per-watt to microservers, Brookwood said. Microservers are an emerging category of dense servers backed by companies like Dell and Hewlett-Packard in which performance can be scaled quickly while keeping power consumption low.

“All the Atoms they have been shipping were based on the original Atom core,” Brookwood said.

Avoton chips will also get power and performance benefits by virtue of being made using the 22-nanometre process. Chips manufactured using this process have transistors stacked on top of each other, which is a change from traditional design in which transistors are placed next to each other. The 3D design, called FinFET by the semiconductor industry, allows chip makers to pack more transistors in a smaller space, which results in power and performance boosts.

Avoton will succeed Atom server chips code-named Centerton, which shipped in December and were made using the old 32-nanometre process. Centerton failed to find much adoption, but will be in Hewlett-Packard’s new dense server – developed as part of a project called Project Moonshot. HP will likely move its server over to Avoton chips once they become commercially available.

There is a growing interest in low-power servers as companies look for ways to cut electric bills while efficiently processing large volumes of Internet and Web requests. Intel is offering Atom server processors as low-power alternatives to its standard Xeon server chips, which are used in a majority of servers today but consume more power. Intel has also accelerated Atom server chip development to tackle the growing interest in ARM processors, which are used in most smartphones and tablets, but are slowly making their way to servers.

Avoton will include a host of server-specific features including 64-bit support, Ethernet controllers and virtualisation. Companies like HP and Dell are offering ARM servers for testing, but there are acknowledged limitations in the processor, including lack of software support and 32-bit addressing, which limits the memory ceiling of servers. However, 64-bit server chips based on ARM are expected to start shipping commercially in large volumes around 2014 and 2015.