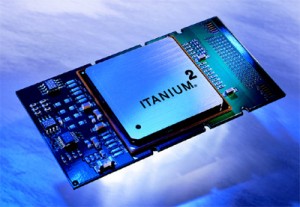 Intel has scaled back plans for the next version of Itanium, raising questions about the future of the 64-bit server chip, used primarily in HP’s high-end Integrity servers.

Intel has also shelved a plan announced only a few months ago to make Kittson socket-compatible with its Xeon server chips, which would have reduced costs for both Intel and HP, the main seller of Itanium systems. Kittson will now plug into the same socket as the existing Itanium 9300 and 9500 chips, Intel said.

“The modular development model, which converges on a common Intel Xeon/Intel Itanium socket and motherboard, will be evaluated for future implementation opportunities,” Intel said.

The revised plans paint a bleak picture for Itanium, according to some observers. “It could easily be that this is their way of cutting it back and having essentially an exit strategy,” said industry analyst Nathan Brookwood of Insight64.

“It may very well be that Itanium’s time has come and gone,” he said.

Gartner analyst Martin Reynolds said there may yet be a new manufacturing process, or “shrink,” for Itanium, if demand improves sufficiently to make the investment worthwhile. But he doesn’t expect any more major updates to the chip’s microarchitecture. “I think after this we’re talking about shrinks,” he said.

Intel launched Itanium in 2001 with the hope that it would eventually unseat the RISC chips used in Unix servers, but sales have never come close to the volumes it expected. Early versions of Itanium underperformed, and Advanced Micro Devices outsmarted Intel by adding 64-bit extensions to its x86 server processors, a strategy Intel eventually mimicked.

Still, HP and Intel have long insisted they are committed to Itanium, a sentiment they reiterated this week. HP killed off its own PA-RISC chip early on in favor of Itanium, and has far more riding on the design than other server vendors. HP has acknowledged paying Intel millions of dollars to fund Itanium’s continued development.

During that time, the writing for Itanium seemed to be on the wall. With shipments relatively low, vendors including Red Hat, Microsoft and Oracle stopped developing new software for the chip. Oracle has been forced to resume its development for Itanium, after HP filed a breach of contract lawsuit, but not before some customers backed off.

“When Oracle said no more software for Itanium, that spooked a lot of customers,” Reynolds said.

It’s unclear what prompted Intel and HP to revise their Itanium plans suddenly, but one possibility is that customers got skittish about Oracle’s retreat and told HP they planned to leave the platform, prompting Intel and HP to reconsider their plans.

HP’s revenue from Business Critical Systems, which includes its Itanium servers, dropped 23 percent in 2012 compared to the previous year. In December, IDC forecast that Itanium server shipments would remain roughly flat through 2016, at around 26,000 systems a year — less than half the volume sold in 2008.

HP has been laying a path to help customers transition from Itanium to Xeon processors if they so wish. It is developing an Integrity Superdome server codenamed Dragon Hawk that will let customers use Itanium and Xeon server blades in the same chassis.

That would have reduced costs further in the longer term, making continued Itanium development more viable. But the companies will no longer make that investment, at least for now. Sticking with the same manufacturing process will also save them some money. “Pulling the plug on 22-nanometer certainly reduces their R&D expense a whole lot,” Brookwood said.

An Intel spokesman said a combination of factors led to the changes, including declines in the overall Unix systems market, of which HP-UX is a part. The revised roadmap also “answers certain requirements of our customers,” the spokesman said, though he declined to elaborate. HP is by far Intel’s biggest customer for Itanium.

HP declined to discuss the matter but said in a statement that it remains committed to its Integrity products, including a new line of Kittson-based systems.

“The recent statement by Intel has no impact on those plans or on HP’s ongoing commitment to our mission-critical customers,” HP said. A spokesman confirmed that HP continues to develop Dragon Hawk, the system that will accommodate both Xeon and Itanium blades. HP may now feel compelled to accelerate development of that system, Brookwood said.

Intel painted the decision as a positive one for customers. Because Kittson will now be socket-compatible with current Itanium chips, upgrading existing systems will be much easier.

But it’s unclear what the cost will be in performance. The latest Itanium chip released in November, known as Poulson, included significant architectural changes, and Kittson was expected to benefit primarily from the new manufacturing process, which produces faster, more energy-efficient transistors.

Intel won’t discuss details of Kittson, noting it isn’t due for release for two to three years. “It’s going to be better, obviously, but we haven’t discussed how much better,” the Intel spokesman said. Manufacturing improvements can be made, even within the context of the current process, he said.

Brookwood said Intel and HP could go on tweaking Kittson’s architecture for years, giving customers a stream of minor improvements. But he was disappointed to see both the process shrink and the Xeon socket compatibility being shelved.

“This clearly suggests some backing off,” he said.