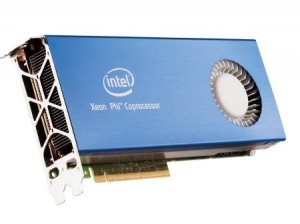 Intel hopes to deliver performance and power-efficiency breakthroughs to servers with the new Xeon Phi family of processors, the first model of which is now shipping to customers, the company said yesterday.

Chips in the Xeon Phi range, also called “Knights Corner,” work with server CPUs to speed up scientific, math and graphics tasks. Targeted at servers and supercomputers, the first Phi chips have 60 or more cores, with the fastest chips delivering more than a teraflop of performance per second.

The Phi chips are the stepping stones toward Intel’s goal of reaching an exaflop (about 1,000 petaflops) supercomputer by 2018. The first Xeon Phi chips will be used alongside Intel’s Xeon E5 server CPUs in a 10-petaflop supercomputer called Stampede that could be active at Texas Advanced Computing Center (TACC) at the University of Texas by early next year.

The Phi chips mix x86-compatible general-purpose and vector processors, and are a response to high-end graphics processors such as Tesla from Nvidia. Some of the world’s fastest supercomputers today, including the U.S. Department of Energy’s Titan supercomputer and the Tianhe-1A system at the National Supercomputer Center in Tianjin, China, combine Nvidia GPUs with x86 CPUs.

The first Knights Corner chip to ship is the Xeon Phi 5110P, which has 60 cores and a clock speed of 1.05GHz. It offers 1,011 gigaflops of peak double-precision performance, 30MB of cache and memory capacity of 8GB. Much like a graphics card, the chip can be plugged into a PCI-Express 2.0 slot, and is cooled by a system fan. Curley said the product is priced competitively with Nvidia’s Tesla or AMD’s FireStream GPUs, which are used in supercomputers.

Intel will also ship two Phi 3100 series chips in the first half of next year. The chips will offer peak double-precision performance of 1 teraflop per second, and include 28.5MB of cache and memory capacity up to 6GB. The Phi 3100A will come with its own fan, while the 3100T uses the system’s fan. Intel did not provide specific pricing or a shipping date for the chips.

Intel also announced the Phi SE10X and SE10P processors with 61 cores and 1,073 gigaflops of computing power. The parts were specifically built for TACC’s Stampede supercomputer and will not be released commercially, Curley said.

In addition to TACC, some leading companies and institutions will support Phi chips in servers and supercomputers, Curley said. IBM, Hewlett-Packard, Dell, Asus and Acer are expected to offer Phi chips in products.

Development efforts around the Phi chips were originally announced in 2010. At the time, the processor was seen as a continued development of a chip called Larrabee, which was to be Intel’s first graphics processor but was later scrapped.

Phi is Intel’s way to keep up with Moore’s Law, which forecasts a doubling of the number of transistors in chips, and therefore a doubling of chip performance, approximately every two years. But balancing performance with power consumption has been a challenge, and programmers are expected to write code that scales across multicore chips.

Intel is providing software tools so applications can be written or recompiled for the Phi chips. Curley said it is easy to recompile existing x86 code so that high-performance applications can take full advantage of the multicore chips.

The Phi chips could also work alongside ARM CPUs in a computing environment, but it would require massive investment from a server maker to build such a system, Curley said.

“There’s nothing in the engineering design that precludes it,” Curley said. However, he noted that current Phi implementations will be on servers with x86 CPUs.