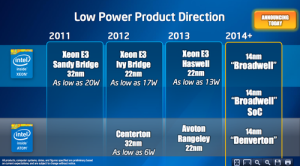 Intel has updated its road map with a new, low-power server chip to help it ward off competition from Calxeda and other makers of low-power chips.

The new chip will be based on Broadwell, a microarchitecture to be introduced next year as the successor to Intel’s Haswell design. But this processor will be a system-on-chip, setting it apart from Intel’s other Xeon server products.

Intel already offers SOCs in its Atom family of chips, but Atom has its own microarchitecture. The new chip announced Monday will be Intel’s first SOC that uses the same microarchitecture as its more powerful Xeon chips.

“With this new product, we’ll be delivering the best of both worlds: high performance and high density,” said Diane Bryant, general manager of Intel’s data centre and connected systems group, at an Intel event in San Francisco.

She didn’t give a name for the new chip but said it will ship next year. It will be manufactured on a 14-nanometre process and include integrated I/O, networking, and application accelerators, Bryant said.

The chip essentially allows Intel to straddle the gap between its current Atom processors, which focus on low power consumption, and its Xeon processors, which are tuned for higher performance but use more electricity.

“They’re trying to cover the whole market. They’ve decided it’s better to have a little bit of overlap than to have any gaps,” said industry analyst Nathan Brookwood of Insight64.

The chip comes at a time of heightened competition in the server market. Rivals such as Calxeda and Advanced Micro Devices are building low-power SOCs using designs from UK chip architecture company ARM, and the new chip from Intel is its latest response to that trend.

Intel didn’t say on Monday if the new chip will be branded as a Xeon or an Atom. Its place between the two product lines could create some confusion for customers, Brookwood said, though he thinks Intel will eventually decide on Xeon.

It’s not the only chip Intel has for low-power servers. The company recently began shipping a Xeon E3 processor based on the Haswell core, and versions of that chip based on Broadwell are expected next year. They will be “general-purpose” Xeons, as opposed to SOCs specifically for low-power, high-density systems.

In its Atom family, Intel will begin shipping a new chip later this year code-named Avoton, based on a new chip core known as Silvermont. Compared with the current Atom core, Avoton will offer “a three-times improvement in power at the same performance level, or a five-times increase in performance at the same power,” according to Bryant.