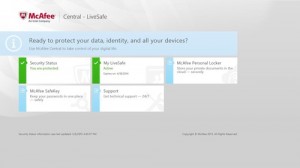 Intel is introducing new ideas to secure the public cloud, offering a service in which online files can be accessed after users are verified by an authentication scheme including face and voice recognition.

McAfee, a unit of Intel, is adding a product called LiveSafe that will offer 1GB of online storage that can be accessed through biometric authentication. LiveSafe has a Web-based management dashboard, and users can be authenticated through face recognition, voice or by punching in a PIN. LiveSafe also includes anti-virus and other security features.

McAfee likens the service to an online vault in the cloud where sensitive documents can be stored. The service can be accessed through tablets, smartphones and PCs, and the authentication schemes vary depending on the device.

Multi-factor authentication is critical for files stored in the cloud, McAfee executives said.

The biometric authentication features are tied to anti-theft and identity-protection features in laptops with Intel chips, which adds additional layers of security, said Gary Davis, vice president of global consumer business at McAfee.

“A big part of this announcement is collaborating with Intel,” Davis said.

A PC needs to have a webcam and an Intel processor to use voice and face recognition. Not all forms of biometric authentication will work on Macs, mobile devices and PCs using Advanced Micro Devices’ x86 processors. In cases where biometric authentication functions are not available, users can access files after punching in the correct PIN. LiveSafe will also work with Android and Apple’s iOS operating systems.

“We needed to make sure we put [files] in the absolute securest location,” Davis said.

Intel completed the $7.68 billion acquisition of McAfee in early 2011, after which it took steps to bring some of the security company’s assets to the chip level. One combined offering is DeepSafe, in which a security layer on Intel’s chips allows McAfee’s malware protection software to identify and block threats such as rootkits, or analyse stealth behaviour of potential malware.

Intel has also said it would use McAfee’s assets to integrate security features at the chip level to differentiate its products from the competition. Some of the features are expected to be embedded in Atom chips, which will then help secure smartphones and tablets.