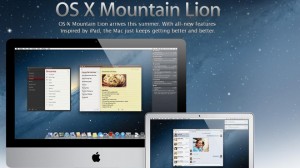 Apple’s move to update Mac OS X this summer shows that the company sees its software ecosystem, especially its iCloud service, as more important than any one product line, analysts said on Thursday.

In a move that surprised many, Apple announced it was seeding developers with a preview of Mac OS X 10.8, dubbed “Mountain Lion,” and would offer the upgrade to customers late this summer.

“Apple’s not merging Mac OS X and iOS, but they are making them feel the same. And that shows that the ecosystem is more important than the device or even the platform,” said Michael Gartenberg of Gartner research.

Gartenberg cited the central position that iCloud plays in Mountain Lion — the first time the operating system launches, it asks for the user’s iCloud credentials, or if the user hasn’t yet used the service, asks if he or she wants to create an account. He also noted the renaming of several integrated applications to match their iOS labels and the introduction of features and applications previously available only to iPhone and iPad users.

Ezra Gottheil, an analyst with Technology Business Research, agreed. “It’s the idea of wherever you are, there you are,” said Gottheil of cloud-stored information. “Basically, you can’t lose your data that way.”

In a statement announcing Mountain Lion, Apple called it “the first OS X release built with iCloud in mind.”

“I would view iCloud not as something with a year or two product life. It’s a strategy for the next decade or more … [and something] I think is truly profound,” said Cook.

Mountain Lion renames Mac OS X’s iCal as Calendar, its Address Book as Contacts, and iChat as Messages to sync the labels used by iOS. It also adds several of the services and apps to the Mac that debuted in the mobile operating system, ranging from Game Center and Notifications to Reminders and Notes.

“It’s going to be a whole lot more iOS and shows that the iPhone is basically the gateway drug to all things Apple,” said Gottheil of Mountain Lion.

Mountain Lion will ship in late summer 2012, Apple said, and be available — like its predecessor Mac OS X 10.7, or Lion — only through the Mac App Store , Apple’s online software distribution centre.

Developers can download a preview of Mountain Lion now, and upgrade to the new OS from either Snow Leopard or Lion, according to Apple.

Gartenberg sees Mountain Lion as an minor upgrade from Lion.

“The naming is indicative of that. It seems this is more an incremental upgrade than a major features upgrade,” Gartenberg said, noting Apple’s past convention, where it labeled Snow Leopard, a minor update, using the same “Leopard” label of Mac OS X 10.6.

While Mountain Lion will be — as Gottheil said — “a whole lot more iOS,” Apple’s purposefully not merging the two operating systems, said Gartenberg.

“It’s continuing to unify the feel of the operation systems and services. There’s a sense of familiarity [with iOS] in Mountain Lion, [but] the two are a distinctly different experience. Apple is preserving what works best on the Mac, that’s what this is all about,” said Gartenberg.

Although it’s difficult to tell where this will end — Gottheil speculated that it might mean Apple will eventually shift from Intel as its Mac CPU supplier to its own home-grown A-series silicon that powers the iPhone and iPad — Gartenberg saw Mountain Lion as just the latest example of the evolution of Apple’s products.

“Success begets success,” he said. “The iPod begat the iPhone, the iPhone begat the iPad, the iPad contributed to the design of the MacBook Air and the evolution of Lion. Clearly, Apple’s products play off each other. But they’re adapting iOS to the Mac in a way without jarring users.”

Gartenberg, who has been using the developer’s preview of Mountain Lion for the past week, said Apple told him it was putting OS X on an annual upgrade pace, matching that of iOS, which Apple also update each year. “There may be a month here or a month there,” he acknowledged. Apple rolled out Lion in July 2011.

But the biggest surprise, said both Gartenberg and Gottheil, was that Mountain Lion was, well, a surprise. “It surprised the hell out of me,” said Gottheil, who wasn’t briefed prior by Apple or given access to the preview.

“Apple managed to keep this under pretty tight wraps, when rumors constantly circulate about almost anything Apple,” noted Gartenberg.