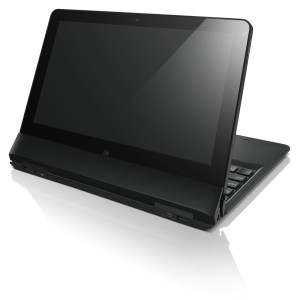 Since the release of Windows 8 last year, a string of detachable notebooks running on the Microsoft operating system have been launched into market. Lenovo has stood strong amidst the ever-changing laptop landscape, and lately, PC giant HP has made its way onto the scene. Reseller puts two of the latest detachable devices head-to-head.

The crux of the detachable is that it obviously needs to nail the notebook device, while making sure the detached tablet is just as strong as a standalone piece of technology. The Lenovo ThinkPad has fast become recognised as a sure thing for IT businesspersons who require decent storage, and a sturdy device. Unfortunately, once detached, compared with the Envyx2, the Helix becomes a little unstable. The design is so that it appears quite literally as a screen which is missing its body, something that the HP hides well. On top of this, the hinge of the base locks when the screen is not attached. However, what the Lenovo does do is reattach to the dock in the reverse position, creating a stronger, more solid tablet, with the added auxiliary battery built into the dock – a fairly attractive feature. Measuring at around 11.75 by 7.5 by 0.46 inches (HWD) and weighing 1.81 pounds, it’s a good piece of kit, but feels better when docked. The resolution cannot be bargained with though; a 1920 x 1080 full HD screen with 10-point touch capability + stylus pen makes up for all of the feel concerns. Enough work has gone into the details to make this a decent tablet. 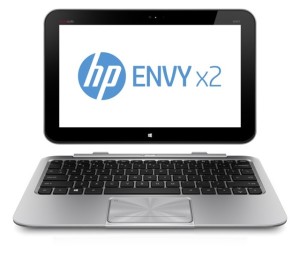 When the Envyx2 is detached from the dock, this machine comes alive. Its aluminium brushed, chrome finish is solid and sleek and feels extremely tough. What HP has done is produce half of a notebook which disguises itself perfectly as a tablet. Sporting Beats Audio, as well as a fantastic connector, the tablet half of this device is a triumph. However, displaying on 1366 x 768 resolution, it loses out to other hybrid laptops. Take the Dell XPS 12 for example, which offers a 1920 x 1080 HD resolution – that’s a shame. But the fact remains that the designers have thought hard about the performance and usability of this model when detached, and a multi-touch detection screens allows the creative types among us to go a bit crazy too.

The Lenovo is solid all round when looking at its specs. Though starting around $1600, for the corporate buyer, it’s worth every penny. The Intel Core i5-3337U processor, 8GB memory, and 128GB SSD make this look desirable from the back of the box. A battery test when docked gave 7 hours and 35 minutes of life – class-leading, which is huge benefit for Lenovo, and with smooth and fast on-screen browsing, it makes this device ideal for presentations and demonstrations.

The Envyx2 doesn’t nearly compare, performance wise, to the Helix, however, it starts on the market at around half the price. So for the consumer it’s a very well-priced device in any scenario. Intel Atom Z2760, with 2GB memory and 64GB SSD, the Envyx2 carries an integrated 2.1MP front-facing camera and an 8.0MP rear-facing camera – comparative to Lenovo’s 5MP rear-facing camera. Where the Envyx2 gets interesting is that although we were told that the Helix ranked as class-leading for battery in the notebook area, the more netbook style HP managed to rack up nearly 11 hours and 30 minutes. It boasts two separate batteries, one in the screen and one in the dock, and is actually extremely efficient. Therefore, although performance wise it cannot compare to the specs of the Helix, for the price and class of the Envyx2, relatively, it takes the second set.

Relatively little competition. The Lenovo is the complete package when fully docked and when sat on a lap it appears just as solid and smooth as a regular notebook. Combine this with a very strong tablet model that can be detached, as well as docked in reverse, you’ve fairly little to frown at. The strong battery life and high resolution screen options make this ideal for the creative businessperson. If you can afford it, buy it.

For all of the Envyx2’s hang-ups, it’s actually a very charming little piece of kit. Though the keyboard and touchpad leave rather a lot to be desired (the touchpad is like sandpaper and extremely uncomfortable to use), the detached tablet is a consumer’s dream. The Beats Audio, style, solidity, and finish are all elements which make it a well-groomed device. However, when attached to the keyboard, it’s not nearly strong enough to compete with other leading notebooks.