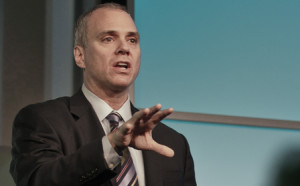 RSA President Tom Heiser is transferring from the security company to its parent company EMC to focus on cloud computing initiatives, according to an internal communication sent from the company on Monday.

The move marks the departure of a high-level executive from RSA and an increased focus by EMC on cloud computing initiatives.

In his new role, Heiser will focus on how EMC products can adapt to a cloud computing world, particularly in the IaaS and SaaS markets. EMC already has a number of other initiatives in the cloud computing market, including Pivotal, which is a spinout from EMC and VMware that focuses on cloud-based and virtualised big data applications. VMware, which EMC owns a substantial portion of, is competing heavily in the cloud computing market with plans to launch a public cloud option named vCloud Hybrid Cloud Service later this year.

As for the security division, RSA Executive Chairman Art Coviello will assume the responsibilities that Heiser oversaw as president in the near term, but EMC executive Mark Quigley will also come on to RSA as the company’s new COO. The transition is expected to occur in the coming weeks.

Before joining RSA, Heiser helped form EMC’s cloud infrastructure and services division, so in a way he’s returning to his roots at EMC.

“As we all know, the explosion of the cloud in all its forms present opportunities and risks for every product category at EMC,” Coviello wrote in the e-mail to company staff. “So, as much as I know we all hate to see Tom go, I have to agree that success for the broader EMC in the cloud space is something that we all need to see become a reality, and that Tom is the right guy to help make that happen.”

Heiser joined EMC in 1984 as the company’s fourteenth employee, and he rose to become SVP of the Central Business Unit, and later SVP of New Ventures. In that capacity he oversaw EMC’s mergers and acquisition strategy, which included the $2.1 billion purchase of RSA. Heiser joined RSA in 2008 as an SVP and was promoted to COO in 2010 and president in February 2011.