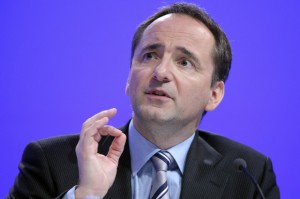 SAP’s co-CEO, Jim Hagemann Snabe, has responded to analyst Forrester’s criticisms following the launch of HANA enterprise cloud, claiming that it is a logical business model because customers want to control their core systems.

Last week, SAP announced that enterprise customers could deploy Business Suite on HANA as a managed service in a private cloud in a third-party data centre, which it hopes will drive the adoption of the in-memory platform.

It suspects that customers will be more willing to test transactions and analytics in-memory if they don’t have to fork out money for expensive kit to run prototypes.

However, key to this is that it the cloud is available under a ‘Bring Your Own Licence’ model, which means that customers will have to purchase a full HANA licence before being able to migrate to the cloud.

Following the announcement Stefan Reid, principle analyst at Forrester, heavily criticised this approach and labelled it a ‘half-baked business model’.

Reid said: “The HANA Cloud is a very careful move to a new business model. It is not disruptive and will NOT accelerate HANA usage to the many more customers who have been struggling with HANA on-premises because of its licensing.

“The announced HANA Enterprise Cloud follows the ‘Bring Your Own License’ paradigm. While this is great for customers that already have a HANA license and would like to relocate it into the cloud, it is useless for customers that might have largely fluctuating data volumes or user numbers and might specifically use a cloud because of its elastic business model.”

He added: “SAP could really disrupt the enterprise market not only with the HANA technology but also with a disruptive cloud business model.”

However, during a press Q&A session at the company’s annual customer and partner event in Orlando last week, co-CEO Snabe rebuffed the criticism and insisted that the Bring Your Own Licence model is in place to ensure that enterprises can maintain control of the core ERP estate.

“We believe there are two kinds of cloud solutions. Firstly, [clouds with] narrow scope, many users, lots of collaboration happening – we have four of those,” Snabe said, referring to SAP’s public cloud offerings – SuccessFactors, Ariba, Cloud for Travel and Cloud for Financials. “These are relatively narrow in scope, they have many users, and they are relatively simple in nature.

“Then you have the core, which runs everything your company does except these extensions. Most of the larger companies that we work with want to control the core. So the HANA enterprise cloud is about simplifying the consumption of that core, without losing their control. What does it mean to control? That means that they upgrade when they want. They configure when they want. They decide how this system is being used for their business.”

He added: “That’s not what happens in the public cloud, there you get whatever is there and everyone gets the same.”

Snabe finished by saying that it is in no way a ‘half-baked business model’ and that it is ‘very logical’ for SAP and enterprise customers.

“With that you have a perfect combination of cloud.”