Post rolling out tests for longer tweets limited to selected users in late September this year, Twitter is now enabling this feature for everyone, according to a blog post by the firm’s product manager, Aliza Rosen on Tuesday. The company has decided to permanently double its character limit to 280 for all languages except Japanese, Chinese and Korean.

Rosen wrote, “Our goal was to make it easy for everyone to express themselves while ensuring we keep the speed and brevity that makes Twitter, Twitter. Looking at all the data, we’re excited to share we’ve achieved this goal and are rolling the change out to all languages where cramming was an issue.”

However, she noted that during the first few days while many users utilised the full 280 limit in “creative” ways as it was “new and novel”, they didn’t go past the initial 140 limit when they tweeted later.

“We saw when people needed to use more than 140 characters, they tweeted more easily and more often. But importantly, people Tweeted below 140 most of the time and the brevity of Twitter remained.” Twitter expects users to go back to normal tweeting habits after the initial excitement wears off. 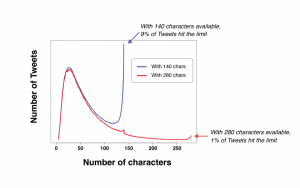