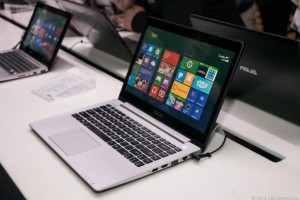 Touch-based Windows 8 notebooks have been selling well for Taiwanese PC maker Asus, but overall Microsoft’s new operating system has yet to find a major following, the company said.

“I think the acceptance of Windows 8 in Q4 is not so good, but the touch-based Windows 8 notebook acceptance is pretty good on our side,” said Asus CEO Jerry Shen in an earnings call on Tuesday.

Shen made the comment as PC shipments continue to remain sluggish despite the launch of Microsoft’s Windows 8 OS. The rising popularity of tablets, smartphones, along with weak economic conditions, have helped depress PC sales, according to analysts.

“Once again, the outlook for the PC industry is not exciting in the near-term,” Shen said. Touch-based Windows 8 notebooks, however, have become a focus for the company. One of its more innovative products was a Windows 8 notebook, called the Taichi, which features two dual touch screens.

Outside of notebooks, Asus has reported strong growth in its tablet business, where it shipped 3 million units in last year’s fourth quarter, up from the company’s original projection of 2.4 million units. Its tablet sales last year were boosted by the Nexus 7 tablet, which it jointly developed with Google.

The company reported that its revenue in the quarter grew 14 percent year-on-year to NT$117 billion (US$4 billion). Net profit was up 21 percent to NT$6 billion.

Shen said Asus’ tablets will become a key contributor to its brand and finances in future.

More than 95 percent of its tablets shipped last year were based on Google’s Android OS, said Shen, who was less optimistic on Microsoft’s rival mobile operating system, Windows RT, being successful in the tablet market.

“At this moment, for last year and this year, I still believe Windows RT needs to take time to ramp up,” Shen said. He predicts the majority of its tablets shipped in 2013 will still use the Android OS.