The first satellite made completely by Emirati engineers in the UAE, will be launched into orbit on 29th October, according to the Mohammed bin Rashid Space Centre (MBRSC). 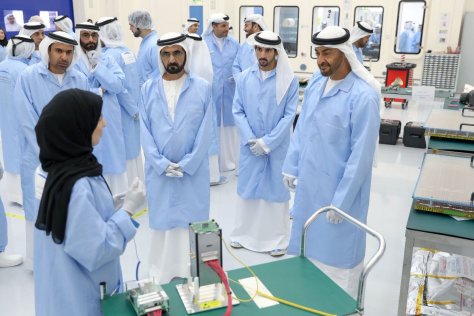 will be launched aboard the H-IIA rocket from the Tanegashima Space Centre in Japan, in partnership with Mitsubishi Heavy Industries, official news agency WAM reported.

Sheikh Hamdan bin Mohammed bin Rashid Al Maktoum, Crown Prince of Dubai and Chairman of the Mohammed bin Rashid Space Centre and the General Supervisor of its projects and plans, said the launch of KhalifaSat is an important step towards achieving the UAE’s space strategy.

“We are proud of the Mohammed bin Rashid Space Centre, where a team made up entirely of young Emirati engineers have developed the first Emirati satellite, KhalifaSat,” the Crown Prince said. “This is an important milestone for our country, an achievement made possible because our leadership supports Emirati youth and encourages them to excel in the fields of innovation and technological development,” Sheikh Hamdan added.

The implementation phase of the project began following the announcement of Sheikh Mohammed bin Rashid, on the launch of the KhalifaSat project in December 2013. The machine was designed, tested, built and managed by Emirati engineers at the MBRSC’s Advanced Technology Laboratories, making it the first satellite to be developed in the MBRSC’s clean rooms.

Yousuf Hamad Al Shaibani, Director General of the MBRSC, said “KhalifaSat is a unique Earth observation satellite which aims to serve humanity. As Sheikh Mohammed bin Rashid Al Maktoum said, “The development of KhalifaSat is not only a source of pride for Emiratis and Arabs, but also a global achievement that will benefit humanity and offer scientific solutions for development globally”.