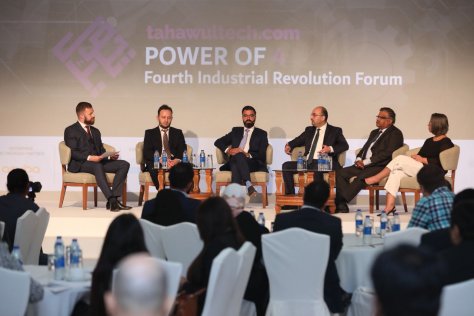 The adoption of new technology will be much faster during the coming years and AI is all bound to change the way we live, said panelists during the session of Artificial Intelligence and Machine Learning at the Power of 4 Forum.

While governments around the world are setting aside massive budgets for implementation of AI into various departments, business processes are experiencing radical changes thereby impacting jobs, human behaviour, profitability and the way work is getting accomplished. AI will affect existing jobs but how humans adopt to adopt to new realities is crucial.

As Celal Kavuklu, head of Business Solutions – Middle East and Turkey, SAS points out, three major factors have influenced the growing relevance of AI during the past two to three years.

“The first most important element is data. The availability of data is very important for AI. Digital transformation has enabled this process,” he says adding that readymade algorithms has made it much easier for developers to customise and adopt AI and along with enhanced processing power of present day computing systems has made the AI adoption much faster.

Elie Abouatme, senior engagement manager at Akamai Technologies notes that the implementation of AI is crucial for businesses as they try to enhance their productivity. Ultimately businesses have to deliver and AI will help them enhance their capability to deliver to their customers and gain more customers.

Samina Rizwan, senior director, Business Analytics and Big Data for MEA, Oracle notes that the adoption of AI will be much faster than previously estimated. “It took 50 years for electricity to be fully implemented, ten years for cellphones to be adopted. But it just took five years for smartphone penetration and just two years for AI,” she argues.

Quoting a research by Oracle she says, 80 to 90 per cent of business application will soon be based on cloud infrastructure while, 50 percent of all data is going to sit on autonomous systems. “So, AI is here and it is fast changing our lives,” she says.

Giving an example of how AI could change things for business Saeed Khan, AGC Networks, vice president and head – Sales (Middle East), says, Insurance companies would take 30 days for some claims to be approved based, but AI could now alter the way approvals are given within hours if not days. “Jobs he says will be causality but humans could adopt and acquire new skills based on future realities.