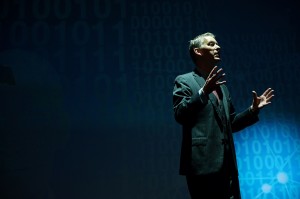 March saw Gartner bring its global Symposium series to the Middle East for the first time at the Madinat Arena in Dubai. The research company used the platform to make some damning statements to its audience of leading CIOs and senior IT executives, and challenged them to join the technology revolution.

Some may say it’s quite bold to declare your IT expo as the world’s most important gathering of CIOs and senior IT executives.

But if you could forgive any company for making such an audacious claim, it would be Gartner, the world’s leading IT research organisation.

It would, however, require for Gartner to be just as audacious, and equally as thought-provoking, in the content it chooses to deliver to those IT executives – especially for the first time it brings the show to the thriving Middle East.

Thankfully, Gartner brought its star players, Gene Hall, CEO, and Peter Sondergaard, Global Head of Research, the latter of whom was more than happy to fulfil the requisite for damning statements.

But for every damning statement comes an unfortunate victim, one of which was Microsoft, whose release of Windows 8 isn’t proving as popular in adoption as Steve Ballmer and co would have liked.

“However good the prospects look for Windows 8 in the consumer market and on tablets,” Sondergaard said, “there are no compelling reasons or business imperatives to drive legacy desktop or laptop devices in business towards Windows 8 today.

“Therefore, 90 percent of enterprises will bypass broad-scale deployment of Windows 8 through at least 2014.”

Sondergaard referred to a “nexus” of forces – driven by cloud, social, mobile and big data – which create a “powerful vortex” that is rendering the world’s current IT architectures obsolete.

To lead through this change, he said, CIOs must selectively destroy low-impact systems and aggressively change their IT cost structures.

He also created an analogy where consumers are the accelerator – driving down prices from their increased usage – and current security strategies are the brakes, holding CIOs back.

“The nexus will therefore force you to rethink your security strategy,” he said. “Overall, the consumers create an accelerating speed of change and innovation, and the complexity of your IT infrastructure and lack of IT skills will be your Achilles’ heel.”

Sondergaard then posed a question to the many CIOs in the audience, asking whether their vendors are helping to accelerate them into the future, or putting the brakes on their progress.

“You can expect an increased number of disruptive vendors that will change the way IT is delivered,” he said. “You only have to look at what has happened in the mobile market to really understand this.

“The top vendors a few years ago – Nokia, Motorola and RIM – are struggling as we move away from purely mobile solutions to the nexus; to socially-capable, information-driven, built-in-the-cloud mobile ecosystems.”

Sondergaard’s next big statement was the prediction that, by 2015, over a quarter of organisations will have a chief digital officer.
According to Gartner, 18 percent of CIOs are already fulfilling this role, which Sondergaard said is driven by the digitisation of business segments like marketing and R&D spend; the digitations of how organisations service their customers to drive client retention; and how organisations are turning this digitisation into new revenue streams.

“The result is every budget is an IT budget,” he said. “Digitisation of the enterprise is commencing as a result of the nexus. Therefore, organisations are going to create the role of a chief digital officer as a part of the business unit leadership – a new seat at the executive table. They will be responsible for the digital business strategy.”

Meanwhile, Hall used his keynote to highlight the increasing importance of the Middle East to the global economy, attributing that to the reason for Gartner’s first Symposium in the region.

Whilst acknowledging oil reserves as delivering a vast amount of prosperity to the region, he pointed to IT as its most important driver of innovation, growth and prosperity going forward.

“IT will be central to the ongoing success of the GCC,” Hall said. “These are remarkable times for information technology. We’re in the cusp of a massive transition period, the impact of which will be on par with that of the industrial revolution.”

Directing the CIOs in the room, he continued, “As technology leaders, it will be up to you to create IT strategy that leverages technology to improve productivity and drive long-term growth.

“It will be your charge to demonstrate the business value of IT to your enterprise, and it will be up to you to lead a new work force. Each of you plays a critical role in leading the GCC through the technology revolution.”