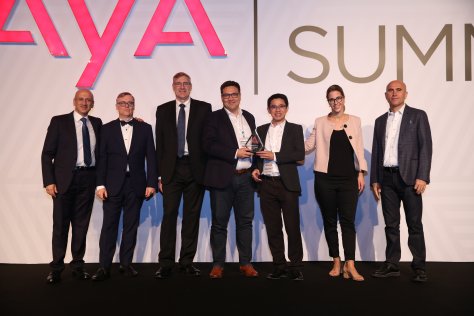 Westcon International has been named Avaya International Distributor of the Year for 2018. The prestigious award recognises the investments that Westcon has made in partner development and enablement initiatives that have contributed significantly to Avaya’s business growth and helped strengthen their market position. The award was presented to the Westcon team at the Avaya Partner Summit in Dubai by Avaya VP, Fadi Moubarak and president Avaya International, Nidal Abou-ltaif.

Trevor Von Puttkammer, head of distribution Avaya International said, “We are delighted to give Westcon the Avaya International Distributor of the Year Award. Westcon EMEA & APAC serve and support Avaya resellers in more than 40 countries. This award is an appreciation for commitment, global presence and growth over the last year.”

David Grant, COO Westcon International, said, “This award is a tribute to the way Westcon and Avaya work as strategic partners at every level in our respective organisations, to the co-investments made with partners, and the dedication of all our Avaya teams. We’re fortunate to enjoy the kind of open, honest and transparent relationship that fosters collaboration and a real sense of joint purpose and mission – resulting in partners and customers that can invest in, profit and grow from their Avaya experience.”

“Being recognised as Avaya’s international distributor is a testimony to Westcon’s unmatched commitment, focus and expertise on Avaya’s technologies. Our dedicated teams continue to be uniquely focused on helping partners accelerate their business by leveraging Avaya’s award-winning solutions,” said Steve Lockie, managing director, Westcon-Comstor ME. “We value our long-standing relationship with Avaya and are honoured to receive this recognition”