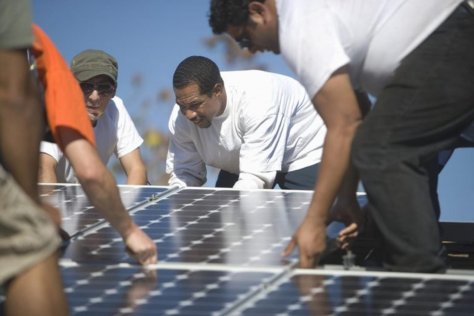 The United Nations Sustainable Development Goal 7, to “ensure access to affordable, reliable and modern energy for all”, could create millions of jobs in emerging countries. However, there is a huge skills gap in most emerging countries. To solve this problem, Schneider Electric, along with a coalition of companies, associations and international organisations has launched the ‘Powering Jobs’ campaign. The coalition’s aim is to speed up the deployment of decentralised renewable energy solutions, and to meet the urgent training needs in low energy access countries.

According to the World Energy Outlook report by the International Energy Agency (IEA), published in November 2017, more than a billion people still don’t have access to electricity, mainly in Africa and Asia. And that Africa alone needs between 100,000 to 200,000 micro grids. The International Agency for Renewable Energy (IRENA) estimates that worldwide, these and other distributed renewable solutions could create 4.5 million jobs worldwide by 2030.

For Schneider Electric, the solution to Africa’s energy needs is a massive deployment of decentralised renewable energy solutions, from primarily wind and solar sources. The technology already exists, and the firm has completed successful projects in Africa and Southeast Asia. But for mass deployment, international financial institutions need to see viable business models, and a lack of qualified people is a sticking point.

“Decentralised renewable energy solutions need engineers, technicians and contractors to function,“ said Thomas André, strategy director for Schneider Electric’s “Access to Energy” program. “We have a huge opportunity to transform both economies and standards of living in these countries.”

However, Africa and Southeast Asia do not have enough qualified people to deliver this transformation. In Africa, for example, the AAI (Africa America Institute) says 7 out of 10 young people living in rural areas are out of school, while just 2 percent of university graduates are engineers.

Schneider Electric said it is committed to reversing this trend.  The company’s “Access to Energy” programme aims at training 1 million people, 10,000 trainers, and at the same time actively support 10,000 entrepreneurs, by 2025. One of the programme’s initiatives is a national centre of excellence in Indonesia, inaugurated in September 2018 in partnership with the Indonesian government, that will train 240 teachers, who will go on to teach 10,000 students in the next five years. The training is part of an Indonesian nation drive to transform the professional training landscape. In other countries, Schneider Electric’s efforts have been helped by dozens of partners, including the Salesians of Don Bosco, the “Aide et Action” NGO, and International Economic Development Council.

Schneider Electric added that it is determined to deploy more resources beyond its ‘Access to Energy’ programme. It’s in this context the Group has connected with Power for All, a global advocacy campaign for distributed renewable energy (DRE).

“When we started talking to Power for All two years ago at the IOREC conference in Nairobi, we realized that we need to raise global awareness of the need to intensify training efforts,” said Thomas André.

With a coalition of companies, associations and international organisations, they launched the Powering Jobs campaign.

“Powering Jobs will focus on ensuring that skills and training are at the center — not the margins — of international and national development policy related to energy access,” said Kristina Skierka, CEO of Power for All. “A much higher level of donor, government and private sector commitment is needed to realize the millions of jobs that achieving SDG7 will create.”

The Powering Jobs campaign will complete a study in early 2019 which will provide the first comprehensive data on jobs related to access to energy, and identify training gaps that need to be filled urgently. The Schneider Electric Foundation co-finances the “Powering Jobs” campaign alongside, among others, The Rockefeller Foundation. Other organisations who have joined the coalition include: UN Women, the International Labor Organisation, AMDA, CLASP, IRENA.

Schneider Electric is also working to mobilize its country leaders, notably in Nigeria, India and Kenya, with extra support from employees involved in the “Access to Energy” programme, including marketing and training teams, and others.