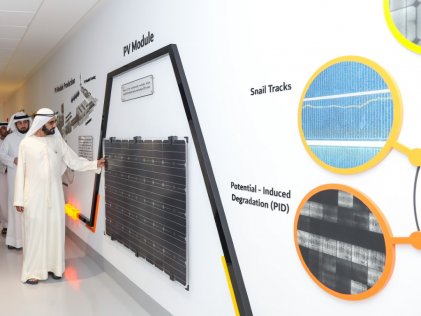 The centre is aimed at building and localising knowledge and expertise and employs around 70 percent Emiratis.

The DEWA R&D Centre is the only facility in the UAE that focuses on renewable energy, smart grid technologies and energy efficiency.

The Dubai ruler also met a number of the R&D Centre’s researchers and experts. The centre was granted one patent, with five more under process.

“The wise leadership attaches great importance to R&D. At DEWA, we work in line with the vision and directives of His Highness Sheikh Mohammed bin Rashid Al Maktoum, who once observed, ‘We are seeking to make the UAE an efficient and influential part of the international academic and research community.’ We are committed to anticipating and shaping the future of energy and water,” Saeed Mohammed Al Tayer, MD and CEO of DEWA.

The R&D Centre received a Platinum Rating for green buildings from Leadership in Energy and Environmental Design by the US Green Building Council.