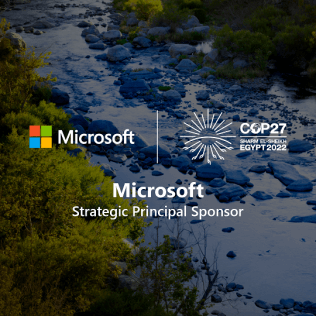 Microsoft, together with Egypt’s Ministry of Foreign Affairs announced its role as a Strategic Principal Sponsor of the 27th United Nations Climate Change Conference of the Parties (COP27). The United Nations conference, to be hosted in Sharm-El Sheikh from November 6-18, 2022, provides a platform for world leaders, businesses, and citizens to come together to discuss their role in mitigating the escalating climate crisis.

Through its COP27 partnership, Microsoft aims to help people and organisations understand and harness the transformative power of technology to set and achieve new and impactful climate goals. ​

During the signing ceremony held at the Ministry of Foreign Affairs offices in Cairo, Microsoft Egypt General Manager, Mirna Arif, commented: “We believe in the transformative power of the United Nations Climate Change Conference of the Parties and are proud to again play a key role in this year’s event. We applaud the efforts of the Egyptian government, under President Abdel Fattah El-Sisi, in prioritising climate change as part of Egypt Vision 2030. Technology will provide answers to many of today’s most pressing climate challenges, and COP27 is an opportunity for the public and private sectors to collaborate on climate solutions to accelerate progress in Egypt and across the wider region”.

Organisations of all types, sizes, and sectors will need to fundamentally transform their operations to meet the new sustainability imperativee. Regardless of where companies are on their journeys, Microsoft is dedicated to being of help.  Microsoft Vice Chair and President, Brad Smith, added, “The world needs to move faster and COP27 will provide an important forum to move from pledges to progress. We are proud to partner with the Egyptian government and support this urgent effort”.

H.E COP27 President-Designate, Sameh Shoukry, Minister of Foreign Affairs of the Arab Republic of Egypt pointed out that the Egyptian presidency is actively engaging with leading companies like Microsoft and other stakeholders to speed up climate action. Egypt’s government believes in the innovative power of the private sector to tackle climate challenges and in their ability to influence their immediate stakeholders, including suppliers, investors, employers, and partners to make an outsized impact on climate change.

Ambassador Ashraf Ibrahim, General Coordinator for organisational and financial aspects of the conference welcomed Microsoft as a Principal Partner of COP27. He emphasised the important role played by the international private sector in promoting sustainable business models and supporting the agreed climate goals. Ambassador Ashraf Ibrahim highlighted the contributions provided by Microsoft on the road to the conference in Sharm-El-Sheikh and looked forward to the continuation of this support leading up to an impactful COP.

Microsoft has been working to become more sustainable for more than a decade. In 2020, the company announced an ambitious commitment and detailed plan to be carbon negative by 2030 and to remove from the environment all the carbon it had emitted since its founding by 2050. The company has built on this pledge by adding commitments to be water positive by 2030, zero waste by 2030, and to protect ecosystems by developing a Planetary Computer.

Speaking at the signing ceremony, Chief Sustainability Officer for Microsoft Middle East and Africa, Sherif Tawfik noted that COP is the place where the world comes together for climate change conversation and action. “We are committed to playing our part and look forward to working together with Egypt on this year’s COP to help expedite the world’s transition to a more economically and environmentally sustainable future for us all”, he added.

“We’re now taking our experiences from the last ten years and using them to help build a more sustainable future together and enable governments, customers, and partners in the region to achieve their own goals. During COP27, these same learnings will be applied to help tackle the extraordinary challenge ahead of us all”, concludes Tawfik.