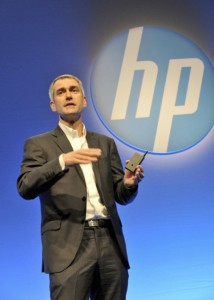 Many analysts and journalists have recently hinted that Meg Whitman’s successor will be hired internally, and Bill Veghte’s name has often been uttered in the same sentence. The ex-Microsoft man, responsible for, possibly, the best Windows release to date, Windows 7, has only been on the board at HP since 2010. However, he’s already produced significant results, increasing software revenue by 18 percent during his first fiscal year. Now, the COO is on a mission to take HP back to its glory days.

Why leave Microsoft at that time – you were the golden boy?

I saw this shift coming and HP is uniquely positioned for this shift. Customers are under so much pressure and they need solutions. They need a mix of software, hardware and services. If I could go to a place that was able to provide these services, and be a part of these solutions then that’s exactly what I wanted to do.

Roosevelt put it beautifully – the best thing in life is working hard on something that matters. That’s how it feels here at HP. It’s not HP moulding itself around my style, it’s me being the perfect fit for HP. This is a people company and we address that in three forms – employees, partners, and customers – that’s Meg’s way, that’s what she cares about. When I arrived here I received thousands of emails from people, people I didn’t even know, wishing me well in the role. This truly is a people focused company and Microsoft lost that in the years leading up to when I left, not that they’re not a fantastic company, doing amazing things, which they are. But I feel like I belong here, you can hear it in my voice – I’m so enthusiastic about where we’re going. Roosevelt said it right – the best thing in life is to work hard on something that matters.

How does the executive board view the Middle East?

The Gulf region is uniquely positioned in ways that many other parts of the globe are not – we see that. There is a clear style of IT emerging at the moment which promises greater simplicity, agility, and lower capital model, and the thing with this region is it doesn’t have the legacy that other regions have. This alone gives it the opportunity to build its vision around this new style of IT.

Another thing I notice about this region is that it’s rare in the fact that the vision and aspiration is not defined quarter to quarter like other regions – it’s defined by a much longer time line.

I was here in 2000, and it’s clear that Dubai has taken on a major role in the economic world since then. You can see the appetite and aspirations here, and this is one of the main reasons that I, as the COO, am investing my time here.

Also, we’ve got a fantastic leadership team here. We, at HP, truly believe that in order to deliver, you need the right solutions as well as the right people to drive them – we’ve got that here. Locally, the values, skills, and passions for technology are extremely high – those are important ingredients.

You work hand-in-hand with Whitman – what makes her the right person to lead this company forward?

I’ve been privileged to work with some of the best leaders that this industry has seen, and Meg is remarkable. She is a great business person, but she also cares so much about people and that’s what this company stands for. Nobody works harder for Hewlett Packard than Meg Whitman.

I needed to find a place that was reflective of me, because I derive my inspiration and motivation from people and I needed a team of people who felt the same. HP and Meg have produced this. She is connecting, she’s connecting with people and that’s why she’s finding so much success.

Recently, Meg and I were at a retirement party for a man who was 73 years old – and he was still reluctant to retire – and had worked at HP for a long time. You know the situation when a person gets too close to you and it’s awkward? This man got really close to Meg, and he said, “If Bill and Dave were still here, they’d do what I’m about to do,” and he hugged her, “Because you’re the HP way,” he said.

What did she do?

She looked at me, rather watery eyed, and said that moments like that are what it’s all about – that was the actual quote.

Are you the man to take on the CEO role next?

My focus at the moment, with the rest of the board, is to make HP all it can be.

But if the job was offered to you?

My focus at the moment is to make HP all it can be.