IT spending in EMEA is projected to total $973 billion in 2019, an increase of 2 percent from the estimated spending of $954 billion in 2018, according to the latest forecast by Gartner.

Saudi Arabia and Israel are leading IT sales across the region even as UK thanks to brexit is pulling down the overall numbers with its negative growth. 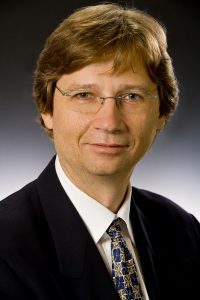 Saudi Arabia and Israel are leading the overall IT spending growth rate in EMEA in 2019, with each country set to achieve a 4.2 percent and 5.3 percent increase in IT spending, respectively. Both countries are investing in building a robust IT sector and making the journey to digital business. Saudi Arabia’s growth is driven by spend on IT services, including cloud computing and storage, while Israel’s growth is fueled by software spending and the increased use of software as a service.

“2018 is not a good year for IT spending in EMEA,” said John Lovelock, research vice president at Gartner. The 5.8 percent growth witnessed in 2018 includes a 4 percent currency tailwind driven by the Euro’s increase in value against the U.S. Dollar.”

IT spending in EMEA has been stuck and will remain stuck until the unknowns surrounding Brexit are resolved,”Lovelock added. Until then, the slow growth of the overall EMEA market is masking the divergent growth rates across the segments in the region.

Gartner analysts are discussing the underlying trends that are driving IT spending patterns this week during Gartner Symposium/ITxpo, which is taking place in Barcelona until Thursday. 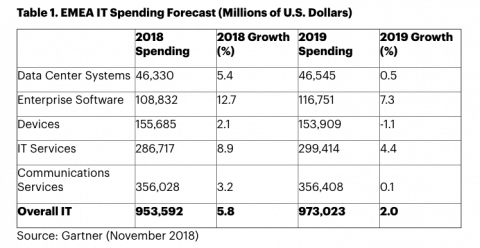 Spending on devices (PCs, tablets and mobile phones) in EMEA is set to decline in 2019. Consumer PC spending declined 9.1 percent in 2018 and demand for business Windows 10 PCs will pass its peak in 2019, with business PCs’ unit growth at 1 percent. Similarly, mobile phones’ unit growth, especially in Western Europe, will start to decline from a 4.7 percent growth in 2018 to -1.1 percent in 2019 as replacements cycles peak and then fall in 2019.

After achieving growth in 2018, spending on data center systems is set to be flat or decline in 2019 and beyond. The brief uptick in spending caused by a bump in upgrade spending and early replacements as a precaution against CPU security issues has abated.

The largest single market — communications services — has become commoditized and is set to show flat growth in 2019. The enterprise software market continues to have a positive effect on the overall spending growth in EMEA. This is largely due to the increasing availability and acceptance of cloud software.

In 2019, Gartner expects cloud, security and the move to digital business to bolster growth in EMEA. End-user spending on public cloud services in EMEA will grow 15 percent in 2019 to total $38.5 billion. In terms of security, with the GDPR in place, penalties for data violations could be as high as 4 percent of revenue.

Brexit Is Slowing Down IT Spending Growth in EMEA