The United Arab Emirates Space Agency (UAESA) has signed a Declaration of Principles with Bahrain’s National Space Science Agency (NSSA) and the UAE’s Khalifa University, for the Training of the Bahrain Space Team. 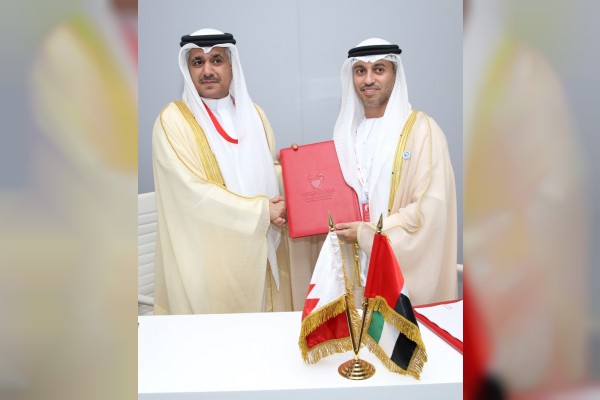 The signing took place on the sidelines of the 5th Bahrain International Airshow, held at the Sakhir Air Base in Bahrain between 14th and 16th November, 2018, under the patronage of His Majesty King Hamad bin Isa Al Khalifa, King of Bahrain.

The document was signed by Dr. Ahmad Belhoul Al Falasi, Minister of State for Higher Education and Advanced Skills and Chairman of the UAE Space Agency, and Kamal Bin Ahmed Mohammed, Minister of Transportation and Telecommunications and responsible for supervising Bahrain’s NSSA.

The signing was attended by Dr. Mohamed Nasser Al Ahbabi, Director-General of the UAE Space Agency, Dr. Mohamed Ebrahim Al Aseeri, CEO of the NSSA, and a number of senior officials and engineers from all parties.

As outlined in the declaration, the parties will collaborate in training the Bahrain space team in satellite technology, design, construction, testing, launching, operations, and control, in addition to cooperating to build a CubeSat to be used for scientific research and carrying out a number of environmental studies.

UAE Space Agency’s Dr. Al Falasi said, “The signing of this declaration is a tangible result of the close relationship between the UAE and Bahrain in the arena of advanced sciences and will see us working together as strategic partners in the region’s nascent but rapidly developing space sector. The ties between our two nations already extend across the political, economic, social, and cultural domains and we have now added the exciting field of space to that inventory. Our growing collaboration in space science and exploration is a testament to our desire and commitment to bolster meaningful partnerships between our two great nations.”

Meanwhile, Bahrain’s NSSA Dr. Al Ahbabi highlighted that the cooperation between the UAE Space Agency and Bahrain’s NSSA dates back several years, at a time when the space sector in both our countries witnessed unprecedented growth, prompted by significant government support. “With the signing of this declaration, cooperation between our two countries will expand further. We will work to exchange expertise, experience, and information related to the space sector to realise our mutual objectives and interests.”