Vertiv has revealed that its latest research identified three such areas where today’s hospitals can benefit from increased attention to and investment in their IT infrastructure. 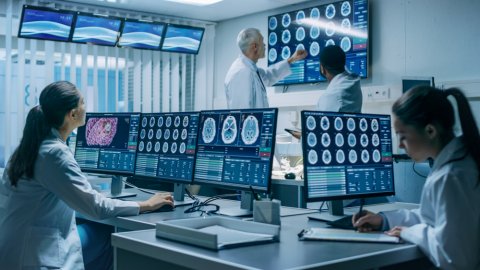 “We have seen a significant amount of changes being made by hospitals here in the Middle East updating their IT systems and infrastructure to support EHR to bolster effective doctor-patient communication that facilitates the establishment of a comprehensive database and minimises time and effort,” said Pierre Havenga, managing director MEA at Vertiv. “Nevertheless, we are still in a transition period as millions of records and transactions are yet to be migrated to the new system and we have identified some gaps in areas that could cause difficulties not just for hospitals, but for patients too.”

Hospitals and health networks have spent the past several years adjusting to the introduction and proliferation of electronic health records (EHR) and building up their IT infrastructure to support and leverage EHR use. There are other parts of the hospital IT network, however, that too often are overlooked, these include:

Imaging Suite: Medical scans and images are benefitting from technology advancements such as 4K resolution that provide stunning, revealing detail. But these improvements also require high data transfer and low latency to operate as intended. Some legacy infrastructure equipment, such as KVM switches that enable easy access to numerous files and servers across multiple workstations, aren’t equipped to work with today’s high-resolution images and video. Newer KVM switches enable higher resolution imaging. Doctors and surgeons should have access to the same high-definition images and videos as those used in the broadcast industry.

Nursing Stations: Many hospitals rely on building UPS systems and generators to provide backup power throughout the facility. That’s fine in theory, but if that centralised UPS system fails, it can be crippling to the routine – and often urgent – work that occurs throughout the hospital. Nursing stations are especially vulnerable, because they rely heavily on IT systems for patient status updates, medication management, and treatment schedules. A local UPS system with extended battery time can deliver redundancy and ensure availability of those critical IT systems. Nurse’s stations frequently rely on a remote desktop or KVM switch to access and manage data, but too often those tools are rendered useless in the event of a loss of network connectivity. For this reason, a KVM switch capable of out-of-band management is a smart choice. In fact, out-of-band remote management is critical across the hospital. Too often today, system maintenance needlessly disrupts life-critical activities when a simple serial console server can allow IT staff to perform routine maintenance remotely without disrupting the more important, patient-focused work of doctors and nurses.

Billing Department: Billing personnel switch frequently between sensitive private patient data and non-sensitive applications. For example, while accessing a patient’s file, they may open an internet browser to search for information about an insurance provider. Without the right equipment, that can create a vulnerability a skilled hacker could exploit. Secure switches traditionally used in government applications allow safe switching between sensitive and non-sensitive platforms, and they are finding new uses in health systems and wherever privacy concerns exist.