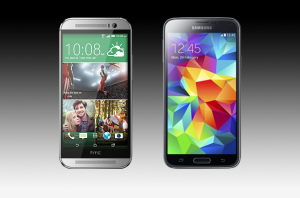 Samsung Electronics and HTC are going head to head on Sunday with almost simultaneous launches of new flagship smartphones. Both companies have a lot to prove, but for different reasons.
“Samsung is fighting for its credibility and HTC for its survival,” said Neil Mawston , executive director at market research company Strategy Analytics, speaking of the duelling events ahead of Mobile World Congress in Barcelona.

Mawston thinks Samsung’s critics have been a bit harsh on the company. Despite the shortcomings of the Galaxy S5, it was the second-best-selling phone last year, beaten only by the iPhone 5S. However, the S5 wasn’t able to live up to expectations, and Samsung is now under pressure to launch something special.

The company is aiming to show that it can build high-end smartphones that look good, perform well and have a cleaner user interface. The Galaxy Note 4 was a step in the right direction that Samsung can build on.

As a follow-up, Samsung is expected to introduce two new models, the Galaxy S6 and S6 Edge. Along with an improved design, the Galaxy S6 is expected to have a screen close in size to the 5.1 inches of the Galaxy S5, but with a higher resolution of 1440 x 2560 pixels (also known as QHD). The screen will likely look great, but a valid question is if the high resolution is needed on a screen that small. Other QHD screens, like ones on Google’s Nexus 6 and the Galaxy Note 4, are markedly larger.

The key for Samsung will be to offer good battery life even though it has added all those pixels. A faster processor developed in-house, better cameras and more RAM are among the other anticipated improvements. The sentiment among operators and other resellers is more positive this time around, with requests for larger volumes than in the run-up to the Galaxy S5 launch, according to Mawston.

HTC is still in a precarious position financially, so it too has to impress. The company has shown signs of turning around its fortunes with revenue and profit growth during the fourth quarter. A successful follow-up to the HTC One M8 would go a long way towards securing a continued growth.

“The reality is that this is a make or break moment, and it has to be third time lucky for HTC,” said Ben Wood , chief of research at CCS Insight.

The first and the second generation One smartphones were great looking devices, but HTC managed to trip itself up on both occasions. The original model suffered from delays and the One M8 was held back by a poor camera and a lack of marketing, according to Wood.

With the new phone, HTC is expected to keep a design similar to previous models and to replace its UltraPixel camera with a more traditional 20-megapixel main camera. Other rumoured specifications include a 5.0-inch, 1080 x 1920-pixel screen and a Snapdragon 810 octa-core processor. The likely explanation for why HTC is sticking with full HD as opposed to a quad HD screen is that it is a good enough resolution for the size, and offers better battery life.

HTC and Samsung’s new flagships are sure to get the most attention, but the majority of smartphones launched at the Mobile World Congress won’t be expensive products. Instead, vendors will launch more affordable products. Some of these smartphones were already announced this week, including the Moto E from Motorola Mobility and the Magna from LG Electronics. So, irrespective of what kind of smartphone you are on the lookout for, there will be something to pique your interest.