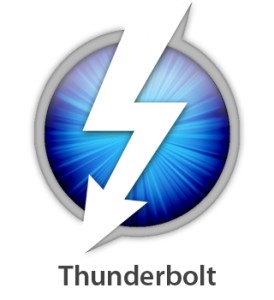 Thunderbolt 2 made its debut when Apple released the latest version of its MacBook Pro last October, but it’s become more prominent with the relase of the new Mac Pro. How different is Thunderbolt 2 from its predecessor? Here’s what you need to know.

What is Thunderbolt?
Thunderbolt is an interconnect technology developed by Intel in cooperation with Apple. Thunderbolt combines PCI Express and DisplayPort into a single connection, allowing for a combination of up to six peripherals, like storage devices and monitors, to be daisy-chained together. You can also connect USB and FireWire peripherals via Thunderbolt, as long as you have the proper adaptor. Those connections won’t run any faster just because they’re on a Thunderbolt connection.

What does Thunderbolt 2 have to do with 4K video?
4K video (a video format that has four times the resolution as 1080p and is gaining popularity with video professionals) requires more bandwidth than the original Thunderbolt can accommodate. Thunderbolt 2 will be able to stream that 4K video and write it to disk at the same time.

My Mac has Thunderbolt 1. Can I upgrade it to Thunderbolt 2?
Unfortunately no. A new Thunderbolt 2 controller would need to be soldered down on the system’s motherboard. That’s why there was never a Thunderbolt upgrade offered for the current Mac Pro.

Recently, the USB Promoters Association announced the USB 3.1 spec, which allows USB to transfer up to 10 Gbps. USB 3.1 is still a while away from shipping, though. Also, while USB hubs are common, USB devices (like printers and hard drives) don’t generally have USB output ports to enable daisy chaining, which is a key feature of Thunderbolt.

Which Macs have Thunderbolt 2?
The only Mac systems that currently include Thunderbolt 2 are the brand new Mac Pro, and the latest generation of Retina MacBook Pros. Thunderbolt 2 will probably make its way into the iMac, MacBook Air and Mac mini when Apple updates them.