Ahead of its Geneva Motor Show, Ferrari has thrown the silks off a lighter, more powerful version of its 488 GTB supercar, the 488 Pista. 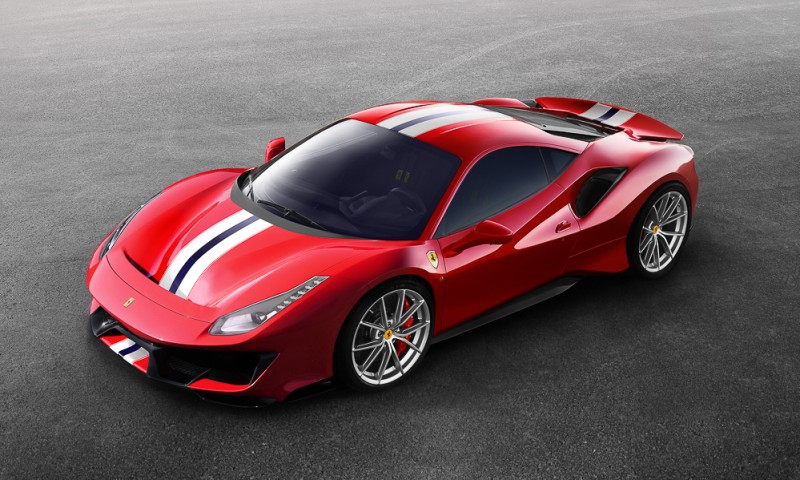 The racing livery colour scheme is a carry-over from the preceding 458 Speciale, and is a further nod to Ferrari’s 78-year heritage.

Utilising the same 3.9-litre turbocharged V8 as its base model, the ‘Pista’ – which translates as ‘track’ in English in a nod to the company’s illustrious motor racing heritage – is the latest in Maranello’s V8 ‘super series’. The newboy is the first turbocharged addition to the line-up, and follows in the naturally-aspirated foot steps of the 420bhp 360 Challenge Stradale (first released in 2003), the 503bhp 430 Scuderia (2007), and the 597bhp 458 Speciale (2013).

Ferrari has also claimed that the 488 Pista marks “a significant step forward” from the previous special series in terms of both its aerodynamics and its technical evolution alongside Ferrari’s FIA World Endurance Championship GT program, in which Maranello has won five GT manufacturer titles since 2012. Indeed, the 488 Pista derives engine and vehicle dynamics, weight saving and aerodynamics from the 488 GTE and 488 Challenge race cars to offer “track-like performance”.

Power for instance has been hiked from the 661bhp 488 GTB up to 711bhp, making the Pista’s 3902cc turbocharged V8 the most powerful in Maranello’s history. Aided by 770Nm (568lb ft) of torque being readily available from 3000rpm (in 7th gear, at least), this “extreme evolution of the turbo unit” means the 488 Pista dispatches 0-100kph in 2.85 seconds, 0-200kph in 7.6 seconds, and is capable of 340kph at full chat. These performance figures are almost identical to the segment-rivalling Porsche 911 GT2 RS, and could, theoretically, make the 488 Pista level-pegging with the halo LaFerrari hypercar, which is officially quoted to hit the ton in “under 3 seconds.”

The dry weight of the 488 has also dropped 90kg to 1280kg, thanks to the addition of an Inconel exhaust manifolds, lightweight crankshaft and flywheel, titanium con rods and carbon-fibre intake plenums. The exhaust manifolds in particular have been adopted to produce an “unmistakably Ferrari” soundtrack.

Punching out 711bhp (720cv), the 488 Pista is 50bhp more powerful than the 488 GTB on which it is based, and makes the “extreme evolution” the most powerful V8 in Ferrari history.

Vehicle aerodynamicists have also been rummaging through the 488 Challenge spare parts box, the most notable bodywork tweaks being the new front and rear diffusers, which increase downforce by up to 20 percent. Ferrari’s patented Side-Slip Angle Control system optimises torque distribution through the corners to make the car easier to handle at the limit, and now enters its sixth generation. The update also features Ferrari Dynamic Enhancer for the first time, a system that adjust the brake pressure at the calipers in order to fine tune their performance at the limit.

Speaking of customers, the lucky few (rarely has a ‘super series’ model been in production for more than two years) might well be expected to part with around $300K for their own example, although prices are unlikely to be confirmed before Geneva.