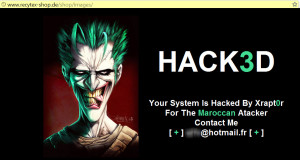 Cyber-criminals are compromising websites at hosting companies at an ever-furious rate in order to exploit them to host dangerous content and send spam via compromised accounts, according to messaging security firm Cloudmark in its threat report on Wednesday.

There are now about 500 websites compromised each day as opposed to less than 200 each day last year, with several days in May of this year showing an upward spike of over 1,600 new hacked websites each day, according to Cloudmark. The company’s analysis is based on the spam filtering it does for about 2 billion mailboxes worldwide.

“This is simply a measure of the fact that there are the largest hosting providers,” Conway says. “Any large hosting provider is likely to have dozens or hundreds of hacked domains.”

Breaking into websites at hosting facilities is often fairly easy, according to Cloudmark. “Spammers do not need root access to the account in order to take advantage of it. All they need is a PHP shell, and they exploit a number of different vulnerabilities in order to obtain this access,” the report notes.

By far the most common attack technique now is a SQL injection attack in Joomla 1.5, which allows a reset of the admin password, Cloudmark says. “This bug was patched in 2008, but many web sites have not updated their Joomla version since then.”

Joomla is the free open-source content management system. Conway says the problem is this old vulnerability in Joomla 1.5 is a tad awkward to patch. The other major content-management system, WordPress, is usually simpler to update, he adds.

The question of who is responsible for patching may not be clear when the business, school or church sets up a website at a web-hosting provider, often with help from a consultant, Conway points out. There may be re-sellers in the mix as well.

The high number of compromised websites today is so substantial that hacked hosting accounts have become a commodity sold in the cyber-criminal underground, says Conway. According to Cloudmark’s estimate, 60% of hacked domains are still under the control of spammers one month after compromise. Cloudmark says it can provide hosting companies with a list of compromised domains on their servers for remediation purposes.