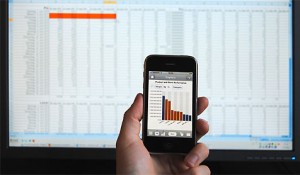 The BI (business intelligence) software market cooled off a bit in 2012 after “a few historic banner years” of spending growth, due to difficult economic conditions and even more confusion over industry buzzwords such as “big data”, according to a report from analyst firm Gartner.

Global spending on BI software was US$13.1 billion last year, a 6.8 percent rise over 2011’s $12.3 billion total, but the pace of growth slowed considerably from the approximately 17 percent rate experienced in 2011, Gartner said in the report released Thursday.

“While this seems a dramatic drop, it was in line with our forecasts published during 2012,” analysts Dan Sommer and Bhavish Sood wrote in the report.

However, “global macroeconomic conditions cannot be ignored,” the report adds. “They led to increased budget scrutiny of both net-new as well as maintenance spending across the entire IT space, and BI was no exception.”

Business for BI was especially more difficult in Europe and Latin America last year, but not in the Middle East, Africa and emerging markets in Asia-Pacific, “which are still in ramp-up mode,” the report states.

Meanwhile, “increased confusion around new hype terms and where the tangible benefits lie most likely contributed to a slowing of sales cycles in the BI space while budget holders are trying to identify the tooling and business value,” according to Gartner.

Moreover, spending on core BI infrastructure platforms “showed flat to single-digit growth” last year, with more spending happening outside of IT at the departmental level as business units seek analytic applications and data-discovery tools geared to their particular needs, according to the report.

In terms of market share, SAP held onto the top spot in Gartner’s survey with about $2.9 billion in BI revenue, although growth year-over-year was only 0.6 percent.

This is partly because its BusinessObjects software is “losing momentum” but also due to the fact that SAP’s portfolio is very broad and “falls outside of the remit of what is tracked here,” Gartner’s report states.

Still, SAP has a “trump card” for BI in the form of a highly loyal user base and a strong sales organisation and partner ecosystem, Gartner said.