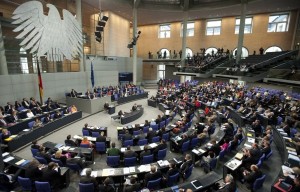 The German government and the German Federal Intelligence Service are facing legal action because they allegedly aided the U.S. NSA data collection program.

“We will send the legal action to the authorities next Monday,” said Constanze Kurz, a German computer scientist and spokeswoman for the Chaos Computer Club (CCC), in an email on Wednesday.

The complainants will bring charges over the alleged involvement of the German government in the NSA spying programs, she said. “That is one reason,” she said, adding that the action was also started “because they did not even try to stop them from tapping into phones, hacking and spying on computers and collecting massive amounts of data although we have clearly laws that forbid foreign espionage.”

Kurz said the legal complaint will comprise more than 50 pages, and will be published Monday.

The German government and the German Federal Intelligence Service (BND) have been cooperating closely with the NSA and have used spy software provided by the NSA, according to a July report from Der Spiegel based on documents leaked by Edward Snowden.

The NSA also provided the BfV with a spying tool called XKeyscore, according to the report. The XKeyscore tool is a surveillance program that the NSA uses to collect data sets and allows analysts to search through vast numbers of emails, online chats and browsing histories without prior authorization,according to the Guardian newspaper.

The BfV has indeed been testing XKeyscore, a BfV spokeswoman said Wednesday, adding that it is “completely normal” to exchange such software. XKeyscore however is only used for data analysis and not for the collection of additional data, she said, adding that the BfV has operated within the German law.

Kurz is also one of the complainants that is challenging the legality of Internet surveillance programs operated by U.K. intelligence agency GCHQ.

She filed a complaint with the European Court of Human Rights (ECHR) in October together with U.K. groups Big Brother Watch, Open Rights Group and English PEN, alleging that the U.K. government illegally used Internet and telecommunications networks to systematically spy on its citizens.

That case was given priority by the human rights court. But the court has not yet admitted the case. It has asked the U.K. government to submit written observations on the admissibility and merits of the case before 2nd May.