Dubai’s Road and Transport Authority (RTA) has signed an agreement with mobility company, Hyperloop One. 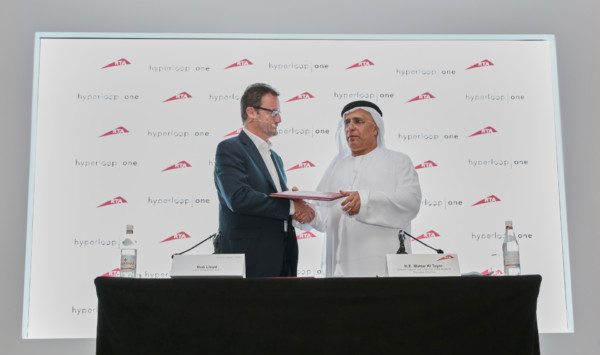 The two parties have agreed to jointly explore routes for a transport system between Abu Dhabi and Dubai which will reduce journey times for people and goods between the two emirates to just twelve minutes.

Director General and Chairman of the Board of Executive Directors of the RTA, H.E. Matter Al Tayer, said, “In line with the vision of H.H. Sheikh Mohammed Bin Rashid Al Maktoum – Vice President and Prime Minister of the UAE and Ruler of Dubai – RTA is collaborating closely with Dubai Future Accelerators to support innovative solutions for the future of mobility.

Rob Lloyd, CEO, Hyperloop One said, “Having signed an agreement with DP World in August to pursue a cargo-based Hyperloop One system at Jebel Ali port, our focus has now expanded to include connecting the emirates. As the central global transport hub, pursuing the implementation of a Hyperloop in the UAE makes sense. The leaders of the UAE understand that transportation is the new broadband, with the power to transform life throughout the GCC.

“We are now at a stage where, from a technological point of view, we could have a Hyperloop One system built in the UAE in the next five years. Our agreement with the RTA is the biggest step yet towards achieving this goal.”

The idea of a Hyperloop – a low-pressure tube through which levitating pods can travel at up to 1,200 km/h – has recently gained attention around the world. Benefits include higher standards of safety than a passenger jet, lower build and maintenance costs than high-speed rail, and energy usage, per person, that is similar to a bicycle.

Alongside the signing of the RTA agreement, the Hyperloop One team introduced, for the first time ever, a vision that represents a complete transformation in the way that people travel in the twenty first century.

“By making autonomous vehicles an integral part of the development of the Hyperloop One system, we are introducing the idea of seamless, uninterrupted end-to-end mobility,” said Josh Giegel, Hyperloop One’s President of Engineering. “Imagine stepping out of your villa in Dubai, into a self-driving vehicle that resembles your living room, and arriving just 48 minutes later at your office in Riyadh. That is what Hyperloop One can deliver.”

Under the terms of the agreement, Hyperloop One will work with McKinsey & Co. and the Bjarke Ingels Group (BIG) – a world-renowned team of architects and engineers – on a detailed feasibility study sponsored by the RTA. The agreement moves the company into its second stage of progress in the UAE, having been invited to the UAE to participate in the Dubai Future Foundation, culminating in a recent presentation of Hyperloop One’s vision to Sheikh Mohammed bin Rashid al Maktoum.