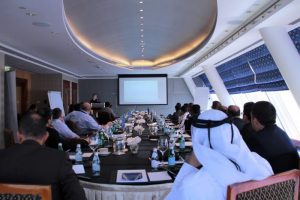 This year’s event, called “A Hacker’s Guide to Security Strategy”, was held at the JW Marriott, Kuwait City, where the country’s CISOs networked with peers, and heard in-depth analysis on the current and future threat landscape from a renowned cybersecurity specialist. The summit comes amid continuing and frequent global media reports on high-profile attacks involving private- and public-sector organisations. Recent years have seen a marked rise in targeted and sophisticated attacks, as businesses try to figure out how to secure their digital estates.

“You can barely turn your head nowadays without being confronted by a statistic or scenario that confirms the importance of a CISO’s role,” said Cyril Voisin, Executive Security Advisor for France, Italy, the Middle East and Africa at Microsoft’s Enterprise Cybersecurity Group. “Last year, for example, it was found that spear-phishing campaigns had targeted more than 400 businesses every day, at a cost of $3 billion to the private sector over the previous three years. Kuwaiti organisations need to understand that the global threat landscape is evolving, and adjust their security posture accordingly.”

A live survey of Kuwait-based PCs, conducted by Microsoft throughout 2015, showed a fourth-quarter peak of 30% of computers experiencing malware of some kind, compared with a worldwide average of about 21%. Around 4.5% of monitored machines faced infections that had to be cleaned, against a global average of 1.7%. The data suggests Kuwait, like many Gulf nations, has higher-than-average rates for both encounters and infections.

Also, speaking at the Kuwait CISO Executive event, Paula Januszkiewicz, CEO and Founder of CQURE, and a world-renowned cybersecurity expert said: “As the game intensifies, it’s time to level up, and venues such as Microsoft’s Kuwait CISO Executive forum are the ideal way to do it. Cyber troublemakers are devious and creative. Kuwaiti businesses and government agencies have to think like hackers, to anticipate their attack vectors and behaviours; only then can they secure what matters most: their precious digital assets.”

Januszkiewicz stressed the importance of upskilling security professionals to meet the changing needs of the digital era. “According to industry statistics, by 2019 we will need 6 million security professionals, but only 4 to 5 million of them will have the required qualifications,” she said. “Hence, it is also very important to address this gap, by levelling up.”