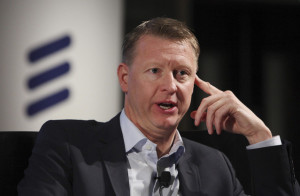 Ericsson President and CEO Hans Vestberg reflected on the pace of change in the industry at Mobile World Congress in Barcelona, showcasing the latest solutions that the company is bringing to market, and making predictions for 2015.

At Mobile World Congress, Ericsson has made a total of nine new launches, with a common theme of transformation and advancing digital experiences.

Vestberg said, “We predict four key changes during 2015: more people will watch streamed, on-demand video than broadcast TV on a weekly basis; video will generate half of the mobile data traffic; LTE subscriber growth will exceed 80 percent; and world mobile broadband coverage will be above 70 percent. This all are massive forces of change and open up new opportunities both in the ICT industry and in other industries.”

The Ericsson Radio System is a new approach in building radio networks on the road to 5G, with the Router 6000 Series integrating IP backhaul into the radio network.

Networks Software 15B, the latest release of Ericsson’s network wide software, introduces Ericsson Virtual Router, app coverage improvements such as simultaneous LTE TDD-FDD operation, a new release of the Ericsson Network Manager, along with other features.

Vestberg continued, “There is a new logic being applied across industries. We can see a definite shift from physical products to digital services. New business models are emerging, along with new ways of solving old problems that create new efficiencies. True customer intimacy can be created using digital tools. All in all, you can see that ICT drives transformation that is really changing the game.”

At the media and analyst briefing, Vestberg announced the new hyperscale capabilities of the Ericsson Cloud System. He said, “Our proposition is about more than realising a cloud solution. It is about realising a digital industrialisation strategy. The new additions to the Ericsson Cloud System, including HDS 8000 (Hyperscale Data centre System). Ericsson, tackle the challenges with security, governance and automation, which are areas we know are blockers for many companies,” said Vestberg.

The second launch that was announced for the first time at the media and analyst briefing goes beyond connected devices to a world of connected systems. Vestberg explained, “The real value of the Networked Society lies in connecting complete systems, not only the devices in the system. That is when we can really start to unlock the hidden value that ICT enables.”

With the launch of Connected Traffic Cloud, Ericsson is aiming to connect traffic systems. The solution is a managed cloud platform that enables the sharing of real-time traffic and road conditions data between connected vehicles and road traffic authorities and also the communication of traffic advisories to drivers.