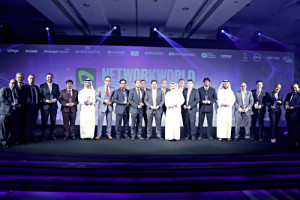 The sixth annual function comprised IT leaders from a variety of influential companies across the region.

The ceremony has established itself as the major event for celebrating networking excellence in the Middle East.

Open to users and vendors alike, Network World ME Awards honoured IT and business professionals who have demonstrated innovative leadership on all sides of the industry.

Following the tremendous success of the previous five ceremonies, CNME assessed 2014’s networking projects that have produced real-world results and the technology providers behind them.

Judges for the event include Arun Tewary, who is Chief Information Officer and Vice President for IT at Emirates Flight Catering, Esam Hadi, Aluminium Bahrain’s Senior IT Manager, Emke Group’s CIO Madhav Rao, and IDC’s Director of Telecoms and Media for the Middle East, Africa and Turkey, Paul Black.

All the staff at CNME would like to congratulate all award winners and nominees, who have been catalysts for immense progress in the Middle East’s IT scene over the last 12 months.

Here is the full list of end user and vendor award winners:

Wireless vendor of the year – Huawei

Networking vendor of the year – Avaya