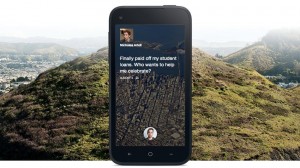 Facebook Home, the new app that replaces the home screen on an Android smartphone, should be banned from corporate networks to avoid unnecessary security risks, experts say.

Facebook introduced Home on Thursday, aiming to give its 1 billion users the option of always staying connected with friends and family through their Android phones.

The app, set for release next week, sits on top of the operating system and becomes the phone’s user interface. The UI is heavily focused on making it easy to interact with other Facebook users.

While that may be great for the social network’s avid fans, the app’s dominance is a nightmare for corporations that have a bring-your-own-device (BYOD) policy for employees.

“That’s the first thing I would block on my network,” Chester Wisniewski, a security adviser for Sophos, said of Facebook Home.

The first problem is the unknown. Because security professionals outside of Facebook have not tested the app, no one knows whether it contains vulnerabilities that a hacker could use to install malware.

“It just has higher threat levels, because we just don’t know,” said Jack Gold, analyst and founder of J.Gold Associates. “It’s an Android device under the covers, but what has Facebook done?”

Even if the app were ironclad, corporations would need to have the option of blocking information from Facebook. But even those controls would not be enough. That’s because the app by nature would make it too easy for employees to post sensitive information on their employer.

“If you’re using a phone where your entire experience revolves around Facebook, you’re going to be more apt to share information, either purposely or unintentionally,” said John Grady, an analyst with IDC.

Even the most careful employee can make mistakes. “So much of security isn’t users doing things they shouldn’t be doing on purpose,” Grady said. “A lot of it is accidental.”

Then there’s the problem of malicious links on Facebook that could lead to malware. Google-controlled Android is already cyber criminals’ favourite target for malware, so opening up another platform from which to launch an attack does not make much sense, experts say.

The reputation of an organisation is also at greater risk with Facebook Home, Wisniewski said. For example, if an employee’s phone is lost or stolen, someone could use it to post racial or sexual slurs that, depending on the employee’s responsibilities, could tarnish the company’s image.

“Simply posting to my wall to impersonate me from my device, if I lost it somewhere, could have a reputational impact to our organisation,” Wisniewski said.

Because of the risks, experts do not expect companies to allow Facebook Home on corporate networks, until they understand its full impact on security.

“I don’t think the target is really business users, so I wouldn’t be that worried about a lot of prevalence of this in the business community, especially at first,” Grady said. “But it never hurts to double down and make sure the policy is clear.”

Gold agrees. “The bottom line for BYOD is that some user devices just shouldn’t be acceptable in a corporate environment,” he said. “There has to be corporate governance.”

Because Android is the most widely used mobile OS, it has become a favourite of hackers, who are quick to exploit its weaknesses. While Google has taken steps to improve security, the OS still has a number of serious weaknesses.

For one, devices manufacturers and wireless carriers are slow in updating the operating system, so many people are using older and more vulnerable versions. In addition, because any website can provide apps, it’s easier for criminals to distribute malware for Android than for its rival iOS, which is used in the Apple iPhone and iPad. Only Apple can distribute apps for the platform.