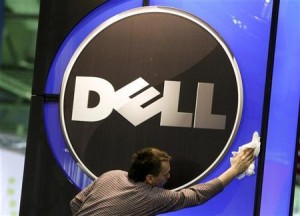 How Dell will fare in private hands – if a buyout is indeed imminent – depends entirely on how the company’s management will react to the declining revenues from its PC business, and how it will develop other areas of its business.

Shares of Dell spiked to $12.5 after a Bloomberg report that cited sources who said the PC maker was in talks with private equity firms about a potential buyout. But even with the spike, its shares were down at least 30% from a high of $18.3 in February last year. Dell has a market cap of about $23 billion.

According to Bloomberg, the enterprise value of Dell stands at about $19.1 billion. That would mean a hefty price tag for a company that’s currently still mostly focused on PC sales, which are in decline globally as consumers’ preferences shift to tablets and other mobile devices.

Global PC shipments were down 4.9% in the fourth quarter, according to Gartner, while IDC reported that worldwide PC sales slipped 6.4% on last year and marked the first time that PC sales had dropped over the holiday season, showing changing buyer tastes.

In a leveraged buyout, one or more buyout firms offer to buy a company through a combination of cash and large amounts of debt financing. Lenders — typically bank lenders — evaluate the risk profile of target companies to fund the deals while buyout firms simultaneously bet that they would profit on their investment by either selling their stake down the road or by taking the company public again.

With a decent cash pile, positive Ebitda, a spot as among the top three PC makers, a well-known brand, and its eponymous founder and CEO, Michael Dell, Dell could potentially be of interest to private equity firms. But any potential offer would be subject to finding willing lenders, and potentially other willing co-investors, who also see opportunity in it as an undervalued company, since no single private equity firm would likely be able to sustain the cash needed to support its purchase price and desired returns on investment.

In theory, even Michael Dell could court banks and his other senior employees to do a “management buyout”, taking the company off the stock exchange and executing a different strategy privately. But that’s a big if and no more hypothetical than the reported potential private equity talks.

With or without a private ownership structure, Dell would still have to contend with the realities of the PC business, and use its cash reserves wisely. Under a private equity ownership, any debt incurred during a potential buyout deal would become Dell’s responsibility to pay off and likely eat into its existing cash reserves. If breaking up the business could create more value, as has been suggested by some analysts to help fellow PC maker HP reverse its ailing fortunes, then a change in ownership or at least a reorganisation of the business could be the way to go to revive declining sales.

Dell could also spark further interest from other buyers, including other tech companies who might be interested in only parts of the business.

But even if a conditional offer is made in earnest, Dell’s board might at least be prompted to pursue a full-blown strategic review to look at all those options, and hopefully craft a strategy to salvage the declining value of the company’s shares, while keeping its existing partner relationships in place.

For the quarter ending on November 2, Dell’s revenue was $13.7 billion, down 11% from a year earlier, and net income was $475 million, down from $893 million from the previous year.