Oman’s Information Technology Authority (ITA) has joined forces with Microsoft in the agency’s ongoing efforts to digitally transform the nation, that is in line with Oman Vision 2040, established by the royal directive of Sultan Qaboos bin Said Al Said. 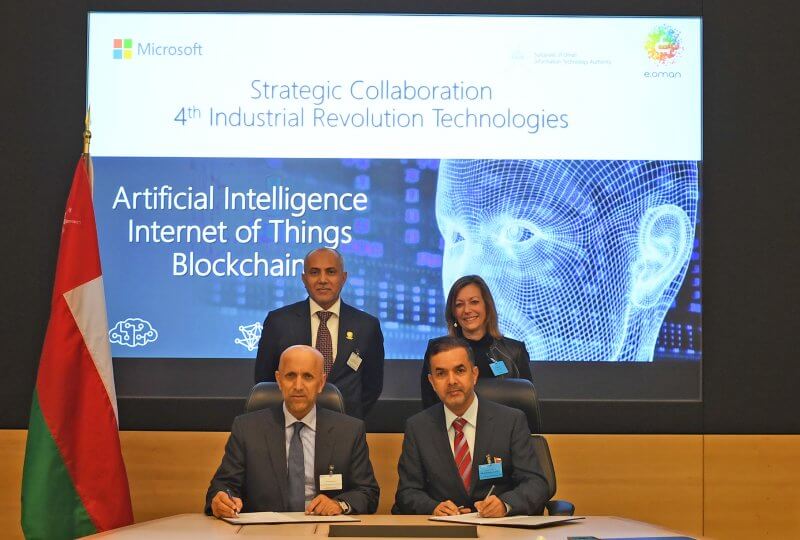 The partnership between ITA and Microsoft was officially signed during a visit earlier this month of senior ITA delegates to Microsoft’s Executive Briefing Center in Redmond, Washington, where the delegates witnessed the advanced technologies designed for ambitious digital transformation journeys.

As the Oman Government’s frontline force in driving digital transformation across the sultanate, the ITA’s areas of responsibility span national infrastructure projects and the supervision of all programmes related to the implementation of the Digital Oman Strategy, including providing professional leadership to other government entities engaged in the digital transformation projects.

The strategic collaboration between the ITA and Microsoft will focus on how Oman can take advantage of the societal shifts occurring as the result of the Fourth Industrial Revolution, and how the sultanate can best leverage technology to stay ahead of changes and ensure that 4IR’s benefits accrue to all Omanis.

Under the agreement, Microsoft will work with its global partners to put Oman’s ITA leaders in touch with the world’s most innovative solution providers, working in 4IR arenas such as artificial intelligence, predictive analytics, machine-learning, blockchain and the Internet of Things. Through such regional and global outreach, it is envisaged that Microsoft will promote and enable knowledge transfer and capacity building that will accelerate digital transformation across the public and private sectors of the sultanate.

“Industry 4.0 is a runaway train that cannot be stopped,” said Dr. Salim Al Ruzaiqi, CEO of ITA. “Instead, we in government must look for ways to harness the change to the benefit of all who call Oman home, in line with His Majesty’s vision. That is why we have partnered with Microsoft; because its leaders tell a compelling digital transformation story – one where the benefits of change are shared by all.”

Each month, Microsoft will deliver technology-awareness sessions for government officials. Separate, quarterly “ideation workshops” will be devoted to capacity-building, turning ideas into practical solutions, and delivering a high-level implementation roadmap. Technology proofs of concept will also play a significant role in the partnership. The ITA, will provide cloud infrastructure for hosting technology workshops and proofs of concept, and facilitate connections with business and technical stakeholders.

“Microsoft is on a mission to empower every individual, organisation to achieve more,” said Sheikh Saif Al Hosni, Country Manager, Bahrain & Oman, Microsoft. “We have long admired the ITA’s vision for digitisation and its efforts to accelerate digital transformation in the public and private sectors of Oman enabling them to empower, engage, optimise and transform. Through this partnership, we will take the next steps together.”

A recent Microsoft study revealed that more than half (51 percent) organisation in the Gulf region, named cloud computing a priority in terms of adoption. As the result of this and similar findings from other recognised market-research firms, and in response to overwhelming encouragement from regional customers, Microsoft announced earlier this year that it will build two dedicated cloud datacenters, one in Dubai and one in Abu Dhabi, that will bring its trusted services to governments and organisations in the Middle East. Enterprises in the region can make the most out of the Microsoft Cloud by availing themselves of enterprise-grade reliability and performance, combined with data residency and the broadest compliance.