Earlier this month, HP conducted its first Global Partner Conference in Las Vegas, USA. It had earlier been conducting these partner gatherings in a regional format; this was the first time the company brought together its entire partner base together in one location. The conference played host to the international media as well, and there were more than 3000 people across three hotels in Las Vegas for the conference.

The reasons for that are pretty clear. The company had an eventful 2011, and it is still trying to live through the fiasco of what is referred to, with a mix of dread and giggly nervousness internally, as ‘the incident of August 18th’. That is when the ex-CEO of the company, Leo Apotheker, announced that the firm would look to off-load its PSG division, and focus entirely on turning itself into the next Big Blue.

HP was clever to time the conference during a quiet period – it was scheduled just prior to the announcement of its quarter results. It gave them the clear time they needed to elaborate on a strategy for their partners, as opposed to being questioned about their actual numbers. And from the strategy it is pretty clear that HP wants to tap more into the software market, and wants to encourage interaction between hardware and software partners to offer more enticing deals to potential customers. (See page 10 of CNME’s March issue for a full analysis on the conference).

Every chance it got, every keynote, HP emphasised that it was keeping the PSG division, that it was investing in innovation and that it was working to offer a unified image to the world. However, one can’t help but wonder, would it really be a wrong move to rid itself of the PSG division? There is such a thing as being too big, and HP might be close to it. What is more troublesome is that there is so much apparent fragmentation between the groups – TSG, ESSN, IPG and PSG. All the VPs of the company might go on stage and emphasise how they are all working together, but even at the conference it was obvious that, on-the-ground, the reality is very different.

Personal systems are highly consumerised and profit margins are squeezed. Besides, HP does not have a play in the tablet or smartphone market – the sections of consumer products that are rapidly growing globally. To get into both these markets, HP will have to create not just revolutionary products, but also put behind it the marketing muscle to rival an FMCG company.

Is HP really ready for that? Or would it be better off selling away the PSG division to a company that can actually dedicate resources to it, and concentrate on playing up its strength in the enterprise infrastructure front and focus on selling more of its software?

A few of us journalists gathered together almost every evening of the conference and argued about just this. I do believe HP would make a good decision to stick to the plan of August 2011. Eitherways, it is going to be an interesting, and tough, year for HP. 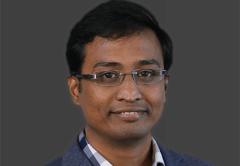