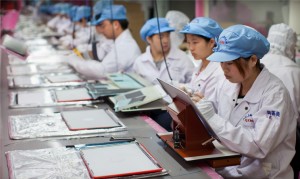 Following a drawn-out investigation, Apple has found 11 facilities within its supply chain using underage labour last year, and has severed ties with one Chinese component maker for failing to address the violations.

The company’s crackdown on underage labour violations was noted in Apple’s latest annual supplier responsibility report, which was released on Friday. Like the previous versions, the report details the company’s efforts to improve working conditions among its suppliers, which now number more than 200.

Last year, Apple increased the number of audits across its supply chain to 393, a 72% increase from the 229 conducted in 2011. As part of the audits, Apple found 11 supplier facilities that used underage workers, although none of the hiring was intentional. In total, the audits found 106 active cases of underage labour, and 70 historical cases.

The suppliers involved were required to return the underage workers to school and pay for their education. In addition, Apple decided to end its business relations with Guangdong Real Faith Pingzhou Electronics, a producer of standard circuit board components. The audits of the supplier last January had found 74 cases of workers under the age of 16, with Apple deeming the violations “pervasive”.

Apple also alerted local authorities to a labour hiring agency in China, known as Shenzhen Quanshun Human Resources Co., which it claimed had been willfully supplying the underage workers. The agency did this by forging documents to make the underage workers appear older, with their parents’ consent. Authorities have suspended the agency’s business license, and also fined the group, according to Apple.

Apple’s audits for 2012 covered more than 1.5 million workers, and also inspected facilities for environmental and safety violations. But even as the U.S. tech giant has made ongoing efforts to address labour violations at its suppliers, worker protection groups have been critical of the company and its largest manufacturer, Foxconn Technology Group. One major criticism has been the use of student interns at Foxconn and other suppliers, which worker protection groups claim is sometimes forced upon the students by schools.

For this year, Apple plans to better monitor the use of student interns by requiring suppliers to provide the number of student workers and their school affiliations, the company said in its report. Certain elements of the student intern programmes “are poorly run” and the “cyclical nature of internship work makes it difficult to catch problems,” Apple added.

In its report, Apple also noted progress made in keeping workers’ overtime within the limits of its supplier code, which sets a maximum 60-hour work week. Apple now tracks the weekly work hours for over 1 million employees within its supply chain. In 2012, suppliers kept workers within the 60 hours limit about 92% of the time.