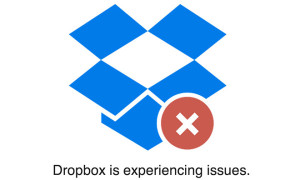 Dropbox service returned Friday night, after an outage of several hours that the file-sharing service blamed on an issue that came up during regular maintenance.

A social network post – allegedly from a hacker group – had claimed responsibility for the outage, but Dropbox dismissed claims that user info had been leaked as hoax.

Users trying to access the Dropbox website from around 6 p.m. to 8 p.m. PT were redirected to a status page acknowledging the outage. “We are aware of an issue currently affecting the Dropbox site,” a message posted on the site said. “We have identified the cause, which was the result of an issue that arose during routine internal maintenance, and are working to fix this as soon as possible.”
The main page of the Dropbox site returned by 8 p.m. PT, but attempts to log in produced an error message.

Just after 8:30 p.m. PT, Dropbox posted via Twitter that service had been restored.

The claims Dropbox referred to in its tweets came from the Twitter account of a group claiming to be affiliated with the Anonymous hacker movement and said it took down the file-sharing service.

In subsequent tweets, the 1775 Sec posted what it claimed was a leak from its hack and said it had hacked Dropbox to mark the one-year anniversary of Aaron Swartz’s suicide. Swartz, an Internet pioneer, killed himself on 11th January, 2013, while facing a variety of hacking charges over allegations that he removed millions of scholarly articles and documents from the Massachusetts Institute of Technology.

Supporters of Swartz have since blamed the government’s aggressive prosecution of the case for Swartz’s suicide.

Before tweeting that restored service, Dropbox denied to several tech sites on Friday night that it had been hacked, again citing internal maintenance issues as the culprit.

It’s not clear precisely how long Drobox’s service had been out for, though the earliest tweets about the outage note indicate problems accessing the site around 5:45 p.m. PT.