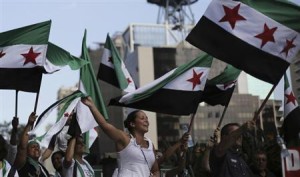 The cache of documents included annotated satellite images, weapons records, Skype chats and personal information on those who have sought to topple President Bashar al-Assad in the four-year civil war. It was unclear if Assad’s regime was behind the campaign.

The compiled a 37-page report describing how the hackers conducted their attacks and the resulting effects.

The heavy reliance on Skype appears to have been the fighters’ downfall, as a professional military would never use such a consumer service for sensitive communications.

The opposition members were contacted by the hackers through Skype. They used a social engineering technique, creating fake profiles of attractive women sympathetic to their cause who supposedly wanted to chat. They also asked what kind of device the victim was using in order to serve the appropriate malicious file.

Eventually, an opposition member would be asked to do a photo swap. The photo sent was a self-extracting RAR archive that was renamed with a “.pif” file extension, according to the report.

When opened, a woman’s photo was displayed, but the malware known as the DarkComet remote access trojan was installed in the background, giving complete control of the device.

Galante said the hackers created a custom version of DarkComet that made it more difficult to detect. They also could compromise Android devices.

The hackers then carefully hunted around for files of interest, taking care to avoid downloading extraneous material. Some 7.7GB of material was stolen, including 64 Skype databases, 31,107 conversations, 12,356 contacts and 240,381 messages.

Only a small number of devices were infected, but as many members of the opposition shared those devices, multiple accounts were compromised, Galante said. The operation appears to have been highly effective.

The hackers, however, made their own mistakes: the server that FireEye found the file on was not password protected and just sitting open on the Internet, Galante said. The server was shut down by the ISP hosting it shortly after FireEye’s findings.