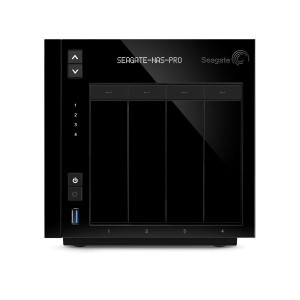 With space for four hard disks, the 16TB storage unit is ideal for small businesses. However, Seagate has added a couple of neat features that make the device accessible to the average file hoarder.

The Seagate NAS Pro line is a two, four, or six-bay small desktop form factor NAS, designed with power users and businesses with up to 50 employees in mind.
Featuring an Intel dual core 1.7GHz processor, the four bay model features 2GB of DDR3 RAM, two Gigabit Ethernet and USB 3.0 ports, and one USB 2.0 port.
The NAS also comes with Seagate’s new operating system, NAS OS 4, and ships with Seagate HDDs. In truth, having all of the software, hardware and drives made by Seagate brings things together rather nicely.
Users can set up and configure multiple devices with the NAS OS 4 interface, which provides dashboards that can allow visibility for CPU, RAM and network connectivity status to name but a few.
Seagate’s Sdrive app offers straightforward management of the NAS Pro, and allows remote access to files with PC, Mac, Android, and iOS.
Although transferring large files is trouble-free, the unit is prone to occasional performance dips in smaller file writes.
At 16TB, it would be stretching a point to say the device is aimed at consumers; the needs of a typical small business would be comfortably satisfied with this slick black box. Nonetheless, those who do hold vast pools of personal data should not be put off by the NAS Pro’s sizeable storage.
Therein lies its greatest strength – the device is very easy to set up without IT expertise at your disposal. Both the avid file hoarder and local grocery store owner would be able to get the device up and running with relative ease.
It comes preconfigured, which is the main setup catalyst, but techies can change the configuration through SimplyRAID technology built into the OS.
SimplyRAID isn’t just useful for IT aficionados; it also comes in handy for the everyday user, simplifying data backup with a range of automated processes.
The NAS Pro is easy on the eye as well as compact, although its needlessly jagged corners pose something of a safety hazard. Nonetheless, the weighty box is nice and compact at 217 x 173 x 172.5mm. Priced at AED 4,403, it provides decent value for money too. Given its size and reliability, all in all, the NAS Pro 4-Bay is a sound investment.