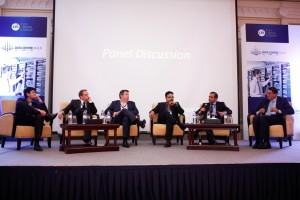 CNME racked up the air miles last month following its inaugural data centre roadshow, Data Centre Build, which saw it visit the UAE, Qatar and Saudi Arabia. Delegates from across the Middle East gathered to discuss the trials and tribulations of the modern data centre.

It doesn’t take a genius to realise that a key challenge for effective data centre management in the Middle East is keeping it cool. The Data Centre Build road show touched on many topics, including Big Data management, human error and skills training in the data centre, but the opening session was all about cooling technologies.

Munters Air Treatment’s data centre key account manager, John Pettitt, opened the events with a keynote which demonstrated the power of evaporative cooling — something the company specialises in.

The evaporative cooling technique, Pettitt explained, uses low-pressure fans and water pumps instead of higher-pressure pumps. The air that passes through is cooled via the evaporation of the water, which is then ducted through to the data centre. Popular enough, but Pettitt used examples of when this solution doesn’t even need to be switched on due to outside temperatures. Of course the question raised here by the CIO and IT decision maker led crowd was one of just how valuable this method could be in a place where temperatures reach 50°C for months at a time.

The issue is humidity. Dehumidifying a data centre which sits in 70-plus percent humidity is apparently key to this method. The Middle East can sit in this bracket during the year, so it’s simply another layer of concern for data centre managers. Using evaporative cooling in a situation of over 70 percent humidity can condense on the surfaces of the data centre, causing problems. However, Pettitt claimed that the biggest issue is contamination of outside and inside air. Middle East CIOs can be forgiven for scratching heads when it comes to data centre management, it seemed.

Human error — the bane of the data centre

Speakers throughout the roadshow touched on which elements are most costly when it comes to successful management of the modern-day data centre. Alberto Zucchinali, Data Centre Solutions and Services Manager, Siemon, followed Pettitt with an insightful look into cabling the physical layer.

A common theme throughout was the importance of people. “Human error is the cause of 37 percent of downtime in the data centre,” said Zeidan.

Stevens said he believes that investment in people is the better way to ensure a successfully run data centre.

“There is a fear of training people, and investing in people. People always say to me, what if I train someone and they leave? I respond by saying, what if you don’t train them and they stay? It’s just as bad.”

And on the contrary from Zeidan’s point, Stevens claimed that 70 percent of all failures are caused by human error.

“It’s always likened to the technician who pulls the wrong plug,” he said.

Stevens claimed that getting to the route of employee problems can save you valuable time and money. Replacing senior members of staff, he said, costs up to 400 percent of the cost of that original member of staff.

“78 percent of staff members in a recent poll said they were unhappy in their current role. That means they’re likely to leave, and that will cost you big time. So what is it that will keep them there?”

Not the money, Stevens assured. According to CNet research, a pay rise is only set to improve morale for a maximum of six weeks.

“They get the pay rise, spend it, and go back to the same level of living within six weeks, so it’s not about the money. Twenty-nine percent of IT staff have been in their roles for under one year. This means that nearly 30 percent of the IT spectrum is under-developed at this time.”

Investment in staff, sophisticated cooling treatments, good cabling, and virtualisation remain top trumps in the data, if these events were anything to go by.
“We build the most exciting and technical data centres here, why? Keep it simple, support the business,” Stevens concluded.